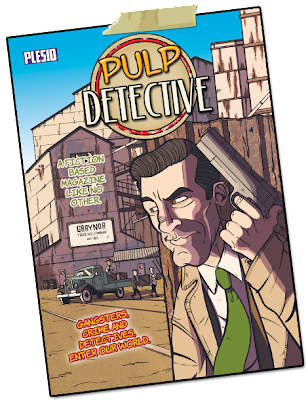 The brainchild of Richard Kavanagh, Pulp Detective magazine launched on September 27, 2012 at www.pulpdetective.com.

Pulp Detective Magazine is set in Bay City a fictional 1930’s American City, that’s full of Mobsters, bent Politicians and hard-boiled Detectives. Each issue is based around three short Detective stories that follow the lives of Agent John Munro and PI Henry Reed as they fight crime and solve cases in this crime-ridden city.

Pulp Detective is a magazine based around three illustrated short stories. The stories are all set in a fictional 1930’s American city called Bay City, a city over run with organized crime.

The first story of each issue is in a third person perspective and follows the life of Federal Agent John Munro, as he takes on Bay City’s most notorious criminals. The intention is for the story line to be ongoing through each separate issue, so that the reader always wants the next installment.

This is the same for the second story, which is in a first person perspective (which works well for private detective novels) and follows the life of Private Detective Henry Reed as he goes about Bay City solving his cases.

The third story in each issue will be random each month. Bank robbers, prize-fighters, hit men and other criminals will be the center of these stories all still set in the underworld of Bay City.

Each story is around 14,000 words and intended for a predominantly male readership of around 10 to 18 years of age. An age range which, in our opinion, is currently poorly catered for by the magazine industry.