BLACKTHORN: THE SPIRES OF MARS - COMPLETE! 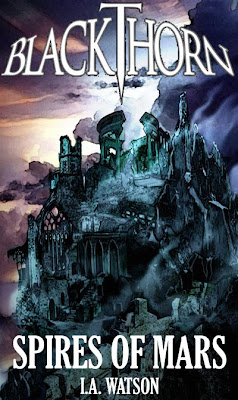 New Pulp Author I.A. Watson has announced that his episodic novel, Blackthorn: The Spires of Mars is now complete with chapter 30.

From I.A. Watson:
The thirtieth and final part of my serial novel over on the BLACKTHORN website is now out. There's now a complete 80,000 word novel waiting there for those who prefer their episodic adventures to be, um, not episodic.

THE SPIRES OF MARS

"A young man desperate to save his sister from the raiders who kidnapped her to slavery – an ancient undead released after half a millennium – four sorcerous First Men who will kill half a world to keep their darkest secret – and three champions who will stand for Mars against horror and tyranny – or die trying!

Join Earth General John Blackthorn, Aria, Princess of Mars, Oglok the Mock-Man and an ever-expanding cast of rebels, monsters, magicians, and villains as the mystery of the ancient Harmony Spires is explored."

Comments are welcome and we'll put all the non-swearing ones on the letters page.
Blackthorn: Thunder on Mars and Blackthorn: Dynasty of Mars are also still available.
Posted by BobbyNash at 12:05 PM