BEN Books is thrilled to announce that Bobby Nash's novel, EVIL WAYS is now available in hardcover around the world. You can find Evil Ways in hardcover at Lulu, Amazon US, Amazon CA, and Amazon UK.

Evil Ways is also available in paperback and ebook. Read it FREE with your Kindle Unlimited subscription. Learn more about Evil Ways at www.ben-books.com and below.
Read more »
Posted by BobbyNash at 10:18 PM

PATRON PERKS CONTINUE WITH 2 NEW EBOOKS FOR PATRONS ONLY! NOT A PATRON? IT'S NOT TOO LATE TO SUBSCRIBE! 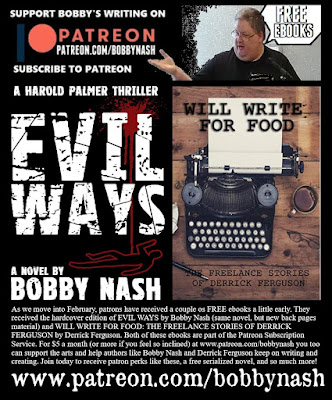 As we move into February, Bobby Nash's patrons have received a couple of FREE ebooks a little early. They received the BEN Books hardcover edition of EVIL WAYS by Bobby Nash (same novel, but new back pages material) and WILL WRITE FOR FOOD: THE FREELANCE STORIES OF DERRICK FERGUSON by Derrick Ferguson. Both of these ebooks are part of the Patreon Subscription Service. For $5 a month (or more if you feel so inclined) at www.patreon.com/bobbynash you too can support the arts and help authors like Bobby Nash and Derrick Ferguson (www.patreon.com/DerrickFerguson) keep on writing and creating. Join today to receive patron perks like these, a free serialized novel, and so much more! Plus, my patrons will receive another book from my catalog this weekend. Meanwhile, on Derrick's Patreon page, his patrons received a free copy of Bobby Nash's novella, SNOW FALLS! 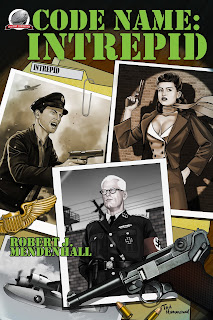 In 1933, the Assistant Secretary of War, Henry Hines Woodring, under the orders of the President, created a top secret department known as the Office of Special Actions. Its purpose; to investigate incidents and situations which threaten the security of the United States that are outside the realm of normal occurrence. A skilled team is assembled from all the U.S. services and designated Codename – Intrepid.

Lt. Colonel Rick Justice, United States Army Air Corps leads the unit. Joining him are Lt. Commander Roger “Sky Hawk” Winchester of the Navy, U.S. Marine Gunnery Sgt. Dexter “Guns” Preston, Master Sgt. Michael “Hammer” Downe U.S. Army. The final member of the team, Rita Marshall, daughter of Admiral James Marshall, Commander of the Atlantic Fleet. A beautiful, college educated spitfire, Rita is more than capable of holding her own with the rest of the team. Together these five take on the most dangerous threats facing America including insidious agents from the rising German Third Reich.

In this volume, writer Robert J. Mendenhall offers up the squad’s first five thrilling adventures reminiscent of such classic pulps as The Secret Six and Ace G-Man. Here are full throttle pulp action tales as only Airship 27 can deliver. 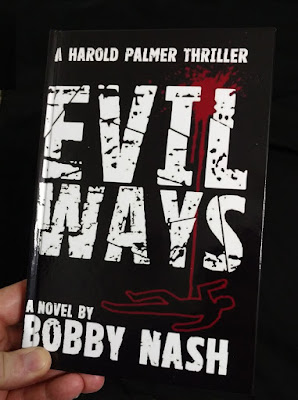 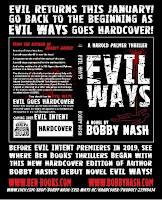 EVIL WAYS premieres in HARDCOVER! BEN Books is thrilled to announce the release of author Bobby Nash's debut novel, Evil Ways, in hardcover. As we prepare for the release of Nash's Evil Intent later in 2019, now is the perfect time to to catch up on, or revisit Evil Ways.

Learn more about Evil Ways at www.ben-books.com and below. 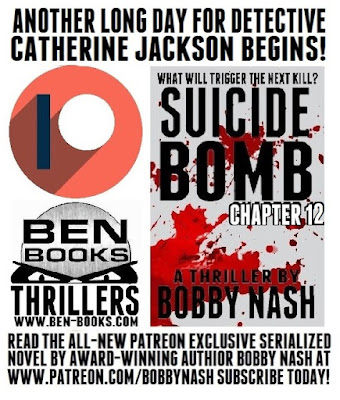 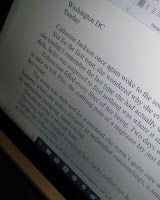 Subscriptions start as low as $1 a month!
Let's create magic together on Patreon!

Posted by BobbyNash at 9:29 PM

A THRILLING SIT DOWN WITH AUTHOR BOBBY NASH PART 2! 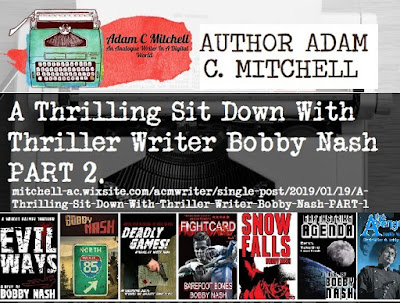 Author Adam C. Mitchell interviewed author Bobby Nash for his blog. This one was broken up into two parts. Part 2 of A Thrilling Sit Down With Thriller Writer Bobby Nash is now live. You can read it HERE.

You can still read A Thrilling Sit Down With Thriller Writer Bobby Nash PART 1 HERE.

Posted by BobbyNash at 1:17 PM 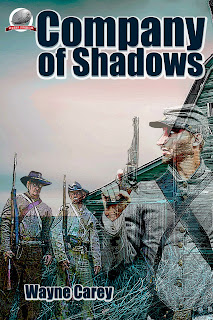 
Frustrated with his job as a high school science teacher, Frank Blaine enjoyed his rare weekends participating in Civil War battle re-enactments. It is passion he shares with his young son, Steve, and several neighbor pals. This particular year they near Ramsey, Virginia the site of the Pine Creek Battlefield where back in 1864 the Union Army fought fiercely to thwart a Confederate excursion northward.


All is going as planned when, in the middle of one exercise, Frank encounters other soldiers not part of his company. Soldiers who suddenly materialize and then vanish in the blink of an eye…as if they weren’t really there. Without any clear rationalization for these encounters, Frank begins to suspect the impossible. He’s being confront by ghosts from the actual battle. And if so, why?


Author Wayne Carey spins a suspenseful story about a hundred year old secret that can no longer remain hidden…even if the dead must at long last tell the tale. Artist Ed Catto provides nine wonderful interior illustrations and Laura Given offers up her haunting cover. All assembled by Airship 27 Art Director, Rob Davis.


Available now from Amazon in paperback and soon on Kindle.

A THRILLING SIT DOWN WITH AUTHOR BOBBY NASH PART 1! 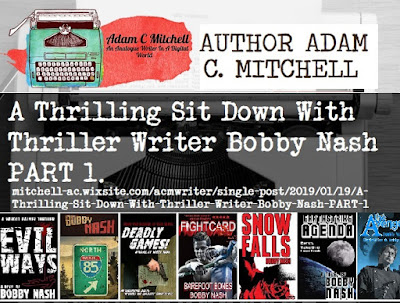 Author Adam C. Mitchell interviewed New Pulp author Bobby Nash for his blog. This one is broken up into two parts. You can read A Thrilling Sit Down With Thriller Writer Bobby Nash PART 1 HERE now.

Posted by BobbyNash at 4:02 PM 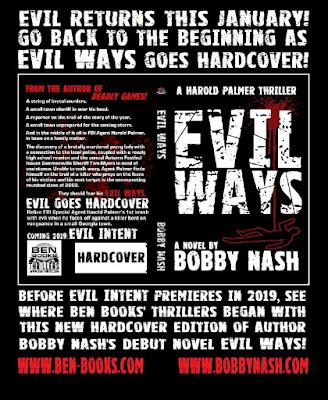 Evil returns this January as Bobby Nash's EVIL WAYS gets the Hardcover treatment!

BEN Books is thrilled to announce that the 2005 debut novel of award-winning author Bobby Nash will be the second book in the BEN Books catalog to get a hardcover edition that will debut in January. Keep watching www.ben-books.com, www.bobbynash.com, and social media for more news as it becomes available. STAY TUNED!

You can read both SNOW and EVIL WAYS for FREE with your Kindle Unlimited subscription.

Learn more about EVIL WAYS below.
Read more »
Posted by BobbyNash at 4:58 PM