ALL PULP REVIEWS- By Ron Fortier 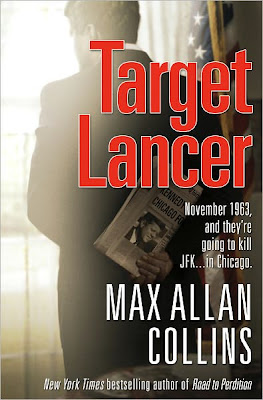 John F. Kennedy was the first American Catholic to become president back in 1960.  That was a big deal for this reviewer who was Catholic, 13 years old and entering his freshmen year at St. Thomas Aquinas High School, a parochial school in Southern New Hampshire.  Three years later, while sitting in a study hall as a junior, we were interrupted by the announcement over the public address speakers that President Kennedy had been shot while riding in a motorcade through the streets of Dallas, Texas.

As much as that news was a tragedy for the entire country, those of us too young to realize the consequences of such a murder watched the transition of power take affect just as we’d been taught in our civic classes and found comfort in that process.  Five years later, while serving in army in Vietnam, the news of Bobby Kennedy’s assignation during his own campaign for the presidency had a much deeper impact. Here we were in a strange, foreign country supposedly fighting for freedom and democracy while back home the nation’s future was being decided by an insane gunman’s bullet.  The world seemed to have gone completely mad.

The Twentieth Century certainly had its defining moments, many of them acts of violence forever imprinted on our national consciousness.  Naturally the public wanted answers and within week’s of the President’s death a government investigation was launched and came to be known as the Warren Commission.  At its conclusion, it declared that Kennedy had been slain by one lone, crazed gunman named Lee Harvey Oswald.  As all of you are well aware, Oswald was gunned down in front of the Dallas jail within days of his capture and died before ever going to trial.  His killer was the owner of a local strip joint with mob connections named Jack Ruby.

Ruby swore he acted on his own until his death in prison of cancer.  Yet to many people his silencing of Oswald seemed to be a cleverly staged killing orchestrated by Machiavellian forces that wanted the truth kept hidden; the same cabal that was actually responsible for Kennedy’s death.  As years passed, many investigators, both private and public, began to uncover mountains of damning evidence that in the end turned the Warren Commission’s finding upside down and definitively proved them to be one massive cover up foisted on the American people.

When we learned that Max Allan Collins’ newest Nathan Heller historical thriller would involve the Kennedy assassination we were naturally intrigued.  What new light could the talented Collins and his phenomenal research partner, George Hagenauer, shed on one of the most overexposed criminal events in all of history?  Having just finished reading “Target Lancer,” the answer to that question provides the basis for one of the most gripping mystery plots ever put to paper.  As usual, Collins sets a historically accurate background then superimposes his own thoughts and beliefs about its scenario via his fictional hero, Nate Heller; the owner of the A-1 Detective Agency of Chicago.  At the book’s opening, Heller is recruited by the Chicago branch of the Secret Service to help with security measures for the president’s planned visit to the Windy City.  Apparently during the Fall of 1963, Kennedy’s people had begun to organize his re-election campaign via several big city visits to include Tampa, Chicago and then Dallas.  With only one year remaining in his term, it was time to start politicking once more.

Within days of agreeing to help the local authorities, Heller is sent to interview a Chicago detective who he has come in contact with an irrational ex-marine who might pose a genuine threat.  From this slim lead, Heller and his partner, a black Secret Service agent named Eben Boldt, learn of a professional hit squad made of two Americans and two Cuban refugees apparently surveying the proposed route of the president’s motorcade through the city.  As each new element is uncovered, Heller starts mentally assembling a jigsaw puzzle that perfectly defines a clandestine military operation.  By the books end, he has unraveled a murderous conspiracy made up of gangland figures and corrupted government agents to eliminate Lance; the Secret Service code name for President Kennedy.

What “Target Lancer” exposes is that the there were three identical hit squads, and their duped patsies, established in all three cities prior to that fateful November in 1963.  As with all Heller books, the historical afterward Collins provides is just as informative as his fiction is captivating.  Upon finishing the book, this reviewer couldn’t help but wonder, now that most of the real principles have all died and gone to their eternal court of judgment, what it is we, as a nation can learn from such history?  Evil men do exist and that we must be ever vigilant to assure they do not usurp the rights of the many by their insidious acts of violence.

For both students of history and lovers of suspense mysteries, “Target Lancer” is a masterful work not to be missed. Collins just keeps getting better and better.