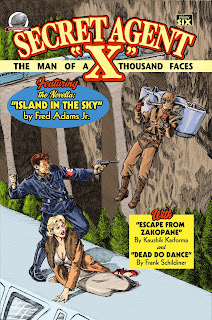 Airship 27 Productions is thrilled to announce the release of “Secret Agent X Vol 6,” continuing the adventures of Pulpdom’s premier spy in three new pulse-pounding adventures. The Man of a Thousand Faces is confronted with the most threatening challenges to America imaginable and only his incredible talents as a super spy can overcome each.

From destroying a world spreading plague launched from a giant airship to stymieing Nazi subterfuge at a mountain enclave and then having to fight dead men under spell of an evil mystic. All in a days work for the Agent X. Writers Fred Adams Jr., Kaushik Karforma and Frank Schildiner deliver three top-notch pulp thrillers that will have fans turning pages at break-neck speed.

“Our fans can’t get enough of Secret Agent X,” reports Airship 27 Productions’ Managing Editor, Ron Fortier. “From the day we launched this series of brand new X tales, pulp fans have enthusiastically supported these books. Although a B character in the golden days of the pulps, we’ve truly enjoyed giving this great character the center spotlight he truly deserves.”

As always, Art Director provides the black and white interior illustrations and also does double duty with his action themed cover based on a scene from Kaushik Karforma’s story, “Escape From Zakopane.”

If you are still unfamiliar with this great pulp hero it’s high time you discovered the master spy who inspired Nick Carter, James Bond, Matt Helm, and all the great heroes of espionage fiction; Secret Agent X.

MEET THE 'GENRE MIXOLOGIST': AN INTERVIEW WITH BOBBY NASH 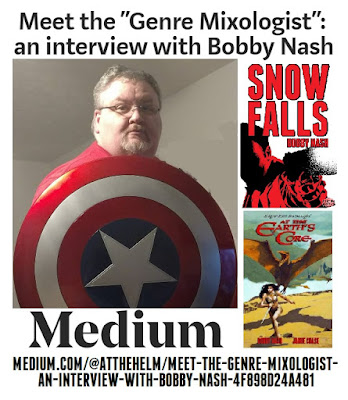 Meet “Genre Mixologist” and New Pulp author, Bobby Nash at Medium. Big thanks to author Nick Ahlhelm at Medium for the fun interview.

By the way, "Genre Mixologist" is totally going on the next batch of business cards.

Meet the “Genre Mixologist”: an interview with Bobby Nash
Bobby Nash is a creator whose name I know all the way back from the early days of my own writing career. He’s a fascinating genre-bender in his work, writing mysteries, crime novels, science fiction and of course, super powered fiction. This makes him the perfect subject for my second creator interview.

Posted by BobbyNash at 7:39 PM

THE RUBY FILES VOL. 1 BLASTS ITS WAY ONTO AUDIO! 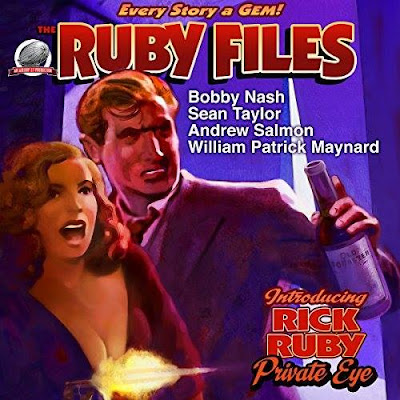 THE RUBY FILES VOL. 2 AUTHORS READ EXCERPTS FROM THEIR STORIES!

Do you have your copy of The Ruby Files Vol. 2 yet? Well, the author's have a surprise for you. Listen to us treat you to samples from the book in this special video above (and at https://youtu.be/j9StoiG738g).


About The Ruby Files Vol. 2: Cool Dames. Hot City. New York City is private eye Rick Ruby’s beat and beautiful women his weakness. All Ruby ever wants to do is earn enough to get by and stay out of trouble. But no matter how hard he tries to keep his nose clean, trouble has a way of finding him. From spies, to gang wars, hangings and cold-blooded murder, writers Alan J. Porter, Ron Fortier, Bobby Nash and Sean Taylor put Ruby through his paces. But in the end, the smart mouth shamus knows that to survive, he’s going to need a little help from his friends. Mystery lovers rejoice as they get ready to crack open The Ruby Files, Volume Two. 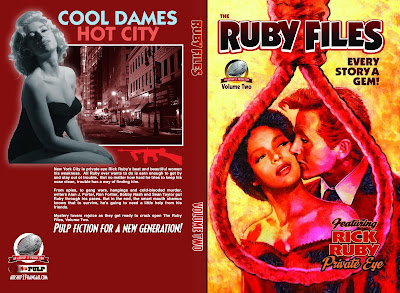 Posted by BobbyNash at 3:44 PM