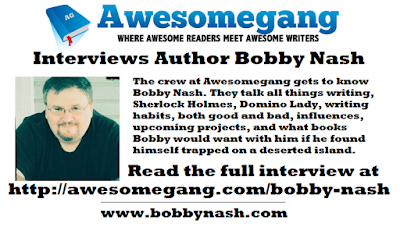 New Pulp Author Bobby Nash was interviewed by the fine folks over at Awesomegang. They talked writing habits (the good, the bad, and the ugly), Sherlock Holmes, Domino Lady. influences, upcoming projects, and what books Bobby would want to have with him if he suddenly found himself stranded on a deserted island. "I'm thinking, as long as I had a laptop, electricity, and wi-fi, I'd be okay," Nash joked.

"Thanks, Awesomegang. You're awesome. But then, you already knew that."
Bobby

AUTHOR BOBBY NASH GETS SMACKED-- AND LIKES IT!

--and we think he liked it!

New Pulp author Bobby Nash said it was an honor to be the first interview for Tommy Hancock's new Venture Galleries' column, THE SMACK!

"This was a fun interview, the first of many to come in this column in the weeks ahead," Nash said. "This was also the first time I've ever been compared to Fred Astaire, which is pretty darn cool. You'll have to read the interview to see how."

Welcome to The Smack, a weekly column devoted to introducing you to writers of Pulp today, both the individuals and the works they pen. You can read the full interview with Author Bobby Nash here.

Posted by BobbyNash at 9:46 AM 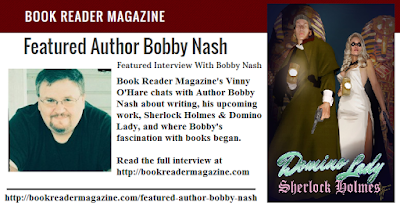 Thanks, Vinny. That was fun.
Bobby

New Pulp Author Bobby Nash was interviewed by Deborah Carney for Interviews With Writers. You can read the full interview here.

Welcome to Interviews With Writers
Featuring interviews so you can find your new favorite author. I like seeing what authors have to say so I can decide whether to take a chance at reading their books, I hope our interviews will help you get to know authors to try out also. Or allow you to get to know your favorite author better!

Posted by BobbyNash at 9:47 AM 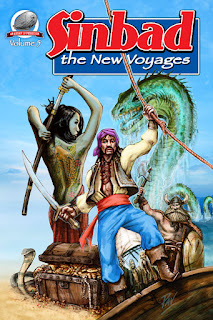 Airship 27 Productions is thrilled to announce the release of the fifth volume in their best-selling fantasy adventure series, SINBAD – The New Voyages.

They are the most daring, courageous, fool hardy seagoing crew ever assembled. Foremost among them are Henri Delacrois, the French archer, Ralf Gunarson, the blonde Viking giant, the lovely female samurai, Tishimi Osara and Omar the irascible first mate. These are the colorful adventurers of the magnificent Blue Nymph.  All pledged to follow their captain, the most famous sailor of all time, Sinbad El Ari.

Now they return in four brand new fantasy tales by Barbara Doran, Ron Fortier, Lee Houston Jr. and Percival Constantine.  They battle an old adversary in returning an aged wizard to his homeland, are threatened by deadly traps in searching for a long lost treasure and confront a shape shifting shaman on a mysterious south sea island.

And now Airship 27 Productions’ own Managing Editor, Ron Fortier, offers up his own story in this fifth collection of the popular series inspired by filmmaker Ray Harryhausen.  “When I first conceived of this particular Sinbad and his international crew, I was totally remembering those three classic Sinbad movies,” admits Fortier. “What kid wasn’t mesmerized by his incredible stop-motion monsters, djins and sea creatures?  Doing this series was our chance of hopefully recapture some of that fun.”

Terry Pavlet provides the stunning cover with Michael Dean Jackson the twelve black and white interior illustrations, all designed and assembled by this year’s Pulp Factory Award winner, Art Director Rob Davis.  Readers of the previous four volumes have been clamoring more and here they are. Set against the backdrop of far-off exotic lands filled with magic and mystery. Here are epic tales worthy of this legendary hero, Sinbad the Sailor!