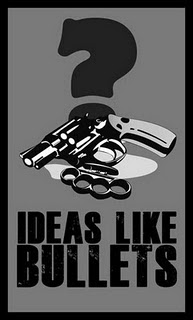 That's right.  Although I've struck out with my own blog (ideaslikebullets.blogspot.com), I have been encouraged in the last few days to restore the ILB column to its first home.  So, when there is an idea that I feel I want to share, it will most definitely appear here.  There may even be a frew ALL PULP exclusives, ideas that I don't share anywhere but here.... but now to our first new ILB!

How this game is played, guys and dolls, is simple.  Generally I share an idea that I don't have time to write or run with and give any and all of You a chance to write it.  Sometimes I want to retain ownership and let you play with it.  Sometimes its a freely given seed of inspiration that You may take and do with as You please.  Today's is a bit of both.

This idea I have is very much just an inkling, but it is for a character that I will hold onto at least most of the proprietary rights to, in a 'Concept created by' sense.   The reason for that is I'm toying with this character becoming a regular addition to the Pro Se line up, someone who might show up in every magazine or somesuch like that. But other than that, I'm going to leave the door pretty open to whatever you as a writer want to do with it....and, if enough of You play along, you'll all even get to see your take on this concept in print.

Here we go, first with the idea-  A man, six feet tall, athletic build, black suit and shirt, red tie, red gloves, black shoes, black fedora, red mask that is pulled over the top of his head and ends at the bridge of his nose..so sort of like a full face mask cut in half, the bottom hem resembling a domino cut.  He has a plethora of weapons, reliant on no one in particular, but the weapons are not high tech gizmos- just guns, knives, anything that is needed to fight crime and destroy evil.  No one knows who he is under the mask, but one key element is that when he slips that mask on, he is a total and completely focused Pursuer of Justice.   Justice as he defines it, by the Law if that fits, in the Spirit of Justice if that is more applicable.   He investigates...He brings to trial...and he prosecutes in his own unique way...That is why  they call him... THE D.A.!

Now, the actual reason they call him The DA is, except for the mask, he wears an outfit that is exactly what prominent up and coming D.A. Frank 'Two Fisted' Finnegan wore on every single day he was seen in public.  Finnegan was also mercilessly killed and butchered, first riddled with bullets by unseen gunmen and then literally sliced into pieces by a fast moving blade wielding assassin known only as The Knife...in front of over 300,000 people at a campaign rally in the largest park in the city in October, 1938.  On January 1st, 1939, this character in a mask and Finnegan's outfit delivered The Knife and six gunmen to the city police station, beaten, unconscious and bound.   The papers immediately picked up on the resemblance to Finnegan and theories abounded....so the name- The D. A.- struck and stuck hard.

So, that's the idea...and here's the rest of it.   You, if you're interested, write a 1,000 word story (I know, didn't say it would be easy) focused on the D.A.  Not one word more, not one word less.  1,000.  It must be complete, beginning, middle, and end.   Any and all who write one will not only be reprinted here, but will also find their way into a future issue of PRO SE PRESENTS (after editing of course).
So, you get a chance to breathe life into this character and get published as a result.  Oh and let's say by December 1st, that thousand words.  Work for you? Good.   Just email to tommyhancockpulp@yahoo.com as you get it done with the subject -THE D.A.-IDEAS LIKE BULLETS.  And don't ask me questions about the character...You have all the information you're going to get...the rest, dear Bulleteer, is up to you.