PUT UP YOUR DUKES! 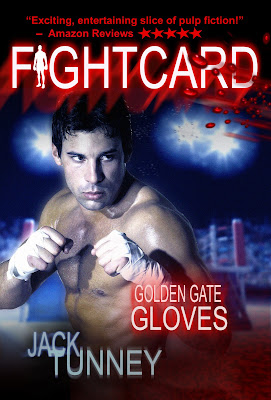 The latest Fight Card has been released and it looks to be a knockout. You can find Fight Card: Golden Gate Gloves at Amazon.

Conall O’Quinn grew up at St. Vincent’s Asylum For Boys, a Chicago orphanage where he learned the sweet science of boxing from Father Tim, the battling priest. After a stint in the Army, Conall finds work on the docks of San Francisco – a place where his fists make him the dock champion. Soon, however, he gets on the bad side of a union boss and is set up for a dock side brawl designed to knockout his fighting career. When Conall comes out on top, things go from bad to worse when he is framed for the docks going up in flames.

Along with Benson, his best friend and trainer, Conall heads for the hills in search of a lost treasure in the vicinity of a mine controlled by the union boss. However, where Conall goes trouble follows and he is quickly embroiled in a heated grudge match between fist-happy miners and lumberjacks.

Championing the miners in an all out slugfest, Conall is about to find out there is more to fighting than just swinging fists… giant, hammer-fisted lumberjacks, the mine owner’s beautiful daughter, union flunkies, and mob thugs all want a piece of him… and when the opening bell rings, the entire world appears to be against him…

You can learn more about The Fight Card series at www.fightcardbooks.com.