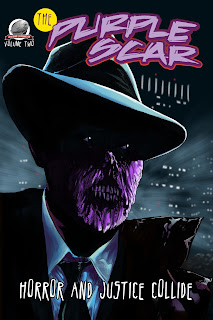 Airship 27 Productions is thrilled to announce the release of its second anthology starring the haunted hero of the pulps, the Purple Scar.

When Dr. Miles Murdoch’s brother was murdered by the mobs, he vowed vengeance. In the following weeks, wearing a horrifying death mask, a new avenger appeared on the streets of Akelton, bringing with him righteous retribution.  Now the city finds itself under protection of a haunted hero, a mysterious angel of doom who metes out his own brand of permanent justice.

In this second volume featuring this little known classic pulp figure, writers Gene Moyers, Paul Kevin Findley, Erik Franklin and David Noe pit the purple hued Master of Fright against a quartet of villainous opponents from a gang of deadly jewel thieves to a merciless arsonist bent burning down the entire city. In these new tales of the Purple Scar, justice and horror are on a collision course you don’t want to miss.

“The Scar, as he was tagged in the stories, is one of the more obscure second string pulp heroes  of them all,” claims Airship 27 Productions Managing Editor, Ron Fortier.  “The thing that always fascinated me about the character was how, via his grotesque death mask, he embodied both horror and action pulps blending them together in a truly unique fashion not found in any other hero mag.”

In this second volume, all art is by the talented Marco Santiago, including the cover which was colored by Shannon Hall.  Book design provided by Airship 27’s Award Winning Art Director Rob Davis.  And all brought to pulp fans just in time for Halloween.  So strap on your .38, pull on that ugly purple mask and get ready to enjoy a little Trick or Treating in the gruesome Purple Scar style! 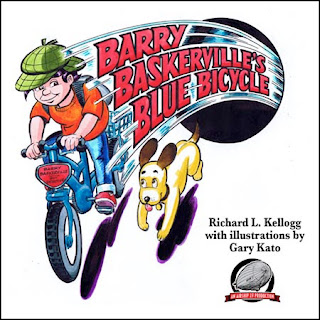