HANCOCK TIPS HIS HAT TO LANSDALE'S 'EDGE OF DARK WATER' 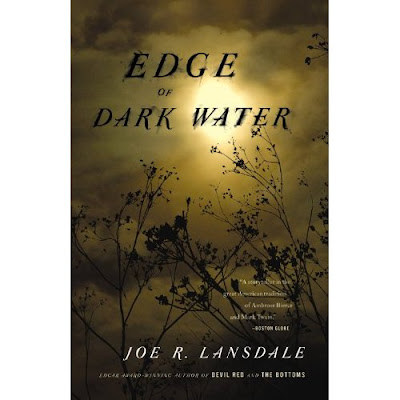 There are several names that get bandied about today, and when I say names I don't necessarily refer to those of us considered firmly under the New Pulp umbrella, but I mean writers that have some notoriety in other ways but clearly also have Pulp sensibilities in their work.   One that is coming up like that more and more frequently, and rightfully so, is Joe R. Lansdale.

Apparently able to tackle just about any genre and any character, from Tarzan to two of my favorites of his own creating (Hap and Leonard), Lansdale is not only an accomplished writer and master of the craft.  He is someone who clearly enjoys the process of creating, the firestorm of breathing life into figments and words.   That is clearly evident in EDGE OF DARK WATER.

EDGE OF DARK WATER, according to the back cover is 'Mark Twain meets classic Stephen King.' Although that is a good mash up comparison, I see some other qualities in this work.

Set in East Texas, EDGE follows Sue Ellen, a teenage girl who has an abusive father, a mother who seems to care about nothing, and, as the book opens, a dead friend.  A dead friend who had aspirations to be a Hollywood starlet.   Disturbed by the fact that this dream is gone for the departed, Sue Ellen determines to dig up her friend, burn the body, and transport the ashes to Hollywood.  Teaming up with her only two friends, each having their own reasons for wanting to leave, Sue Ellen sets off downriver on a journey that will forever alter her as well as those closest...and farthest from her.

EDGE OF DARK WATER definitely harkens back to Twain's Huck Finn and has that rural eeriness that permeates King's early work.  But it has so much more.  This is a classic quest story, heroes off on a journey to take a friend to her final resting place.  It's also a chase story as a Villain of sorts almost ripped from the pages of a Pulp it seems joins the journey, out to make sure Sue Ellen never finishes it.  But even beyond all that, this is a study of people, a varied wide expanse of humanity laid open and filleted for the reader to ingest, enjoy, and even be appropriately disturbed by.

FIVE OUT OF FIVE TIPS OF THE HAT-EDGE OF DARK WATER is most definitely a multifaceted story that touches every button a Pulp fan might have and goes far beyond that.
Posted by All Pulp at 7:19 AM