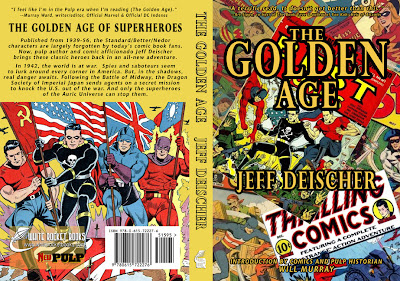 White Rocket Books’ newest release brings some long dormant characters back into the limelight in an all-new adventure in THE GOLDEN AGE, a novel by Jeff Deischer.

About The Golden Age:
Published from 1939-56, the Standard/Better/Nedor characters are largely forgotten by today's comic book fans. Now, pulp author and comic aficionado Jeff Deischer brings these classic heroes back in an all-new adventure.

In 1942, the world is at war. Spies and saboteurs seem to lurk around every corner in America. But, in the shadows, real danger awaits. Following the Battle of Midway, the Dragon Society of Imperial Japan sends agents on a secret mission to knock the U.S. out of the war. And only the superheroes of the Auric Universe can stop them.

Join the superheroes of the Golden Age in this epic new saga that legendary pulp author and interviewer Art Sippo called "a terrific read--it doesn't get any better than this!"

Includes an Introduction by comics and pulp historian Will Murray.

The book is available at CreateSpace and Amazon.

Posted by BobbyNash at 6:41 PM