The Pro Se Open has its own page now! http://pulpmachine.blogspot.com/p/pro-se-open.html

The Pro Se Open is a list of Anthologies that Pro Se Productions, a leading publisher of Heroic Fiction and New Pulp plans to do in the future. This is an open call on all the books listed in the Open, that is anyone can submit a story for any of the books in the list. For some of the anthologies, there is no deadline essentially, that is until all the slots open in any given book are filled. However, some will have deadlines attached and these will be noted by each individual title.

The Process will be as follows-
1. An upcoming Anthology is listed in the Pro Se Open.
2. Submissions are accepted (a 2-3 paragraph proposal for the story and at least a two page writing sample if you are a new writer submitting to Pro Se)
3. When the slots for the collection are all filled, a deadline for story completion will be set of approximately ninety days from the closing of the anthology. This will give writers time to complete their tales, artists time to do covers, etc.
4. The book will be published within approximately 30 days following the passing of the deadline.

Even though the deadline will be 2-3 months out once a book is closed, Editors assigned to these projects will follow up, monitor, and make sure work is being done. Steps will be taken to move the anthology along as planned if work is not being done in a timely manner.  This means, however, that until all the slots are filled on an anthology in The Pro Se Open, it will remain open, but it is Pro Se's commitment that once all the works are in for a particular collection, that that collection move into high gear toward publication, regardless of current publishing schedule.

The Pro Se Open will be updated periodically as to adding new collections and removing ones that have been filled.

TALL PULP- Although every country has its mythologies, none quite have the same flavor as that of that infant of a nation, The Good Ol' US of A.   Instead of Gods and such, a whole crop of larger than life type heroes and characters have popped up throughout American history, collectively known as 'Tall Tales'...   TALL PULP (tentative title) will focus on characters who populate American Folklore, such as Paul Bunyan, Mike Fink, Pecos Bill, and more!  These stories, each 10,000 words in length, will be Pulp minded tales that focus on one Tall Tale figure (either completely fictional or the tall tale version of a real person, such as Davy Crockett).  These stories may either be retellings of the original legends with a Pulp flavor, set in the original time period of the characters themselves, or can be completely new updatings of these characters into other settings (John Henry in 1930s Chicago for instance)  Three stories, 10,000 word stories

COVERT OPS: GEMINI- Not all spies are actors, models, or...spies in their off mission time.  Under a particular program in the United States, active since the 1950s, hundreds, maybe even thousands of America's top secret operatives live the majority of their lives as housewives, plumbers, teachers, garbagemen, and other ordinary, even mundane existences.  But when they receive a message with their own personal codename followed by a single word- Gemini- then they leave suburbia or the rat race and become America's only hope for survival.  Outside of their 'real' lives, these spies show skills and talents not ever apparent in their daily existence.  Guided by a voice known only as 'Officer James', C.O.G. Team Leaders stand ready to pull the best and most devious spies available to the US out of the humdrum and plunge them straight into danger.  Three stories, 10,000 words each (If interested, request bible).

BADGE CITY-  This collection is all Police Procedural, but with a slight twist.   Set in an unnamed metropolis, referred to by the local cops and even crooks as Badge City due to the tenacity of the police force, the three stories in this collection will be set in three different time periods and each story will focus on a member of the Connors Family, each one serving on the Police force in some capacity.   Starting in the 1930s-50s, then moving onto the 1960s-80s, and ending in the 1990s-now, three writers get the opportunity to write true police procedurals as written in the eras covered while building the history of a family and a city! Think Dragnet meets 87th Precinct meets Blue Bloods.   Three stories, 10,000 words each (If interested, request bible.)

PULPOLOGY- It has been said often that Pulp has its origins in ancient tales, legends, the mythologies of many lands. Taking this to heart, this anthology will feature stories starring characters from mythologies around the world! Actual mythological characters in new adventures set in their own era, the ancient world of heroes and monsters, or updated takes on classic myths (Jason and The Argonauts in the Old West, for example). Either way, these stories will spotlight the characters and strengths of mythologies world wide and put a two fisted, high octane Pulp spin on the legends themselves! 3 Stories, 10,000 words each. VOLUME ONE OF THIS ANTHOLOGY IS CLOSED PENDING ACCEPTED STORIES BEING TURNED IN, ACCEPTING SUBMISSIONS FOR VOLUME TWO

SIX GUNS AND SPACESHIPS- This is a wide open, do it as you want Space Western Anthology. The requirements- It's got to be a mash up between classic westerns and space opera (Firefly, Outland, Bravestarr, just a few examples). It doesn't take place on Earth at all, has to be off planet, but time period and location beyond that are up to the writer! Three Stories, 10,000 word stories VOLUME ONE OF THIS ANTHOLOGY IS CLOSED PENDING ACCEPTED STORIES BEING TURNED IN, ACCEPTING SUBMISSIONS FOR VOLUME TWO

TO LOVE AND DIE- Pulp Romance is back! And its deadlier than ever! These stories will be set in any time period up until modern day and must feature two things-Romance...and Treachery. These stories may be mysteries, horror tales, adventure yarns, whatever, but there must be a strong core of romance mixed with danger throughout. Three Open Slots, 10,000 word stories- VOLUME ONE OF THIS ANTHOLOGY IS CLOSED PENDING ACCEPTED STORIES BEING TURNED IN. ACCEPTING SUBMISSIONS FOR VOLUME TWO

THE BLACK FEDORA-A BOOK OF VILLAINS- This is just what it says it is, an anthology dedicated to stories about the bad guys we love to hate. These stories will focus on original villains and of course the heroes they face, these tales similar in style to the FU MANCHU stories of the past. But this isn't only for yellow perils!! Any type of villain that populates pulp is welcome to try on THE BLACK FEDORA! VOLUME ONE OF THIS ANTHOLOGY IS CLOSED PENDING ACCEPTED STORIES BEING TURNED IN, ACCEPTING SUBMISSIONS FOR VOLUME TWO

NEWSHOUNDS! - Dogged reporters, crusty editors, copyboys and cub photographers with dreams of grandeur, Pressmen who know the city lives and breathes by what they print! One of the most fertile grounds for action packed pulp has always been the newspaper office. And all those wonderful character types and more all work for The Partisan, a 1950s paper partial to the common man, to righting the wrongs done against the innocent and the weak! And this gaggle of hard bitten, hard fighitng men and women are known near and far to those who love them and those who wish to see them dead! Do No Wrong in Their City unless you want it covered by the Newshounds! 3 Stories, 10,000 word stories) If Interested, request Bible.  THREE SLOTS STILL OPEN

THE ADVENTURES OF MOOSE AND SKWIRL, TROUBLETAKERS- Trouble happens everywhere in the universe. Any time. Any place. And to make sure whatever cockeyed balance there is is kept, the universe takes care of itself, assigning special individuals to the unpredictable, unrewarding, and usually life threatening task of just being in the completely wrong places at the totally right times to hopefully keep everyone...or most everyone from dying. But the universe doesn't trust just one person to do this, no it works in groups of two. Moose-Stocky, barrel chested, two fisted, sarcastic, and ready to deliver a soliloquy over the bodies of whoever stands in his way... And Skwirl-Seductive, sexy, and with a sense of humor that could kill....literally. These two 'Trouble Takers' travel space and time very much at random, figuring out whatever issue they are thrown into and then fixing it. In their own unique, usually very destructive, bloody way. Three stories, 10,000 word stories ( If interested, request short bible for this one). TWO STORIES APPROVED, ONE SLOT REMAININGTHE

NINTH CIRCLE-VOLUME ONE, This collection centers around a crime ridden precinct and borough in a city that shuffles its misbegotten and forgotten to THE NINTH CIRCLE. Three Slots-10,000 word stories (If interested, request short bible for this one) TWO SLOTS OPEN, 12,500 WORD STORIES

HIGH ADVENTURE HISTORY-Ever wanted a chance to write a masked man enforcing justice in ancient Egypt? Or a larger than life genius and his team of heroes righting wrongs in renaissance Italy? Or mad scientists terrorizing the Arizona desert towns of the Old West? Then here's your chance! HIGH ADVENTURE HISTORY will include stories of traditional pulp concepts and tropes plopped into our very own past, pre 1900! Take your favorite pulp stereotype and wrap it up in ancient or not so ancient places and people and join us in HIGH ADVENTURE HISTORY! Three stories, 10,000 word stories- TWO SLOTS OPEN

THE SHAMUS DIRECTIVE is a project actually founded in historical context. Just prior to and all during World War Two, The United States government via the FBI as well as members of the Armed Forces, developed dossiers on all licensed Private Investigators in the country. A list was then comprised of the ones deemed appropriate and 'good' and they were then considered to be 'cleared' to be used in espionage missions, mostly on the homefront, or missions that regular forces just could not deal with for various reasons. THE SHAMUS DIRECTIVE poses the theory that not only was this list compiled, but the people on it were truly the world's greatest detectives and they were formed into sort of a team to handle major issues in conjunction, even maybe saving major parcels of land and people in the process. Six stories , 10,000 word stories (If interested, request short bible for this one) TWO SLOTS OPEN

If you're a writer or artist and are interested in these anthologies or have questions, email Editor in Chief Tommy Hancock at proseproductions@earthlink.net! And check out Pro Se at www.prosepulp.com and www.pulpmachine.blogspot.com. 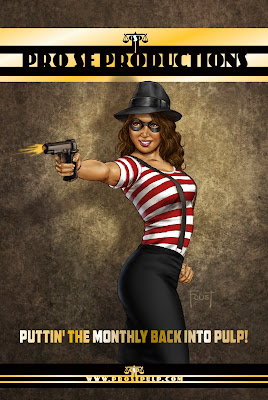