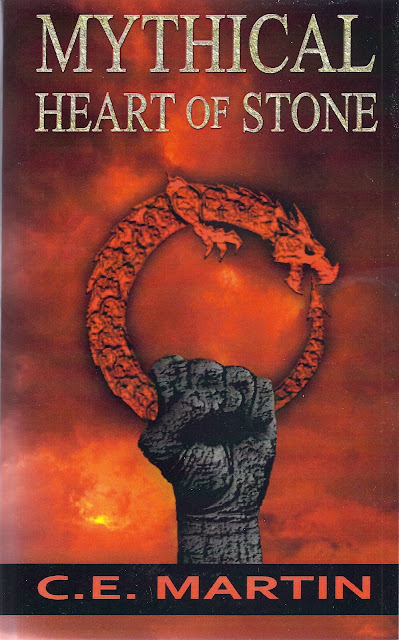 The explosion of self-publishing has flooded the reading world with thousands upon thousands of new works by unknown writers.  For the most part, logic and literary tradition dictates 95% is crap.  One percent is great and the other four percent is made up of really good stories worthy of being sought out and enjoyed.   C.E. Martin’s “MYTHICAL : Heart of Stone,” is very much part of that delightful four percent.  This is a superior action/adventure fantasy which mixes the superhero genre with lots of mythological magic.

Colonel Mark Kinsler is the leader of a squad of stone soldiers known as Detachment 1039.  When their attempt to capture and destroy a terrorist shape-shifter goes horribly awry, Kinsler is the only survivor.  His body, petrified in stone, is dumped in the Arizona desert where it is discovered by a group of five high school seniors on a final jaunt before graduation.  The only girl among the group, Josie, is somehow personally drawn to what she believes is a bizarre stone sculpture of an Adonis like figure. When she inadvertently helps Kinsler heal and regain his human form, she soon finds herself caught up in a fantastic world of spies and ancient superbeings.

Kinsler, having suffered temporary amnesia, initially relies upon Josie and her four male companions to help him sort out his current predicament.  Eventually, as his memories slowly return during their trip to Vegas, he soon realizes his target is planning on killing the visiting vice-President and assuming his place in the government.  Unsure as to whom he can trust, Kinsler has to rely on Josie and the boy named Jimmy to see him through his mission.

Martin writes amazing action sequences that race across the pages effortlessly.  They are so well delivered with sophisticated attention to the smallest details.  His skill pulls the readers into the middle of these slugfests and brilliantly allows them to experience each vicariously. Very few writers have this storytelling gift so well realized.  Oh, sure, there are some clichéd plot devises, but they never seemed forced and become integral parts of the narrative from beginning to end.  What the book does is open the doors to a unique world that is much like our own and yet very, very different. But Martin is wise enough not to overwhelm us with those differences too quickly and deftly reveals them gradually so that by the book’s climax, we’ve been fully introduced to this other Earth; one I very much want to revisit again real soon.

“MYTHICAL : Heart of Stone,” is something old made new and a true pleasure to discover.  And it’s only the first step in what I predict is going to be an amazing series.  Buy your ticket and get on board now!