THE ADVENTURES OF RADIO RITA Airship 27 Production is thrilled to announce the debut of pulpdom’s newest hero, aviator Radio Rita. Envisioned originally as a pin-up representation of the publishing house by Managing Editor, Ron Fortier, the character took on a life of her own when several New Pulp writers suggested writing stories of the tall, action loving redhead. Enticed by the idea, Fortier challenged writers to imagine their own versions of the character from a set of four basic physical attributes. The end result is four unique women, all of them Radio Rita. Buckle up for adventure, pulp fans. She’s still one of a kind.

Volume one features tales by Teel James Glenn, Samantha Lienhart, Gene Moyers and Mel Odom with illustrations by Rob Davis and a cover by Ted Hammond. 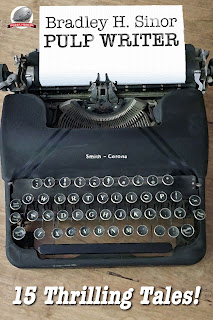 From horror to fantasy, action adventure to mystery, writer Brad Sinor has covered them all. With his own unique styling and original twists, he produces remarkable stories. Collected here are 15 such tales guaranteed to excite and thrill any lover of pulp fiction.