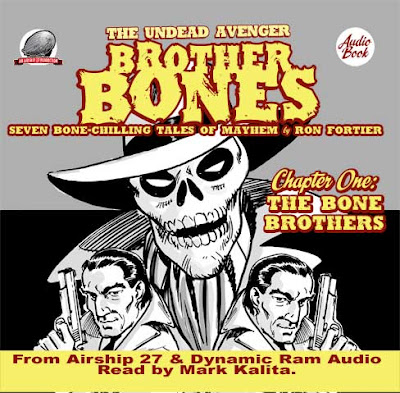 Just in time for Halloween, the first Brother Bones the Undead Avenger audio tale is now available for download from our Airship 27 website. Produced by Dynamic Ram Audio, Chris Barnes Sound Engineer and read by Mark Kalita, this creepy thriller is wall to wall pulp fun. And only $2 a download.

In 2008 Airship 27 Productions released BROTHER BONES; a collection of seven original stories featuring Ron Fortier’s original character known as the Undead Avenger. Taking place in the fictional port city of Cape Noir, the stories dealt with zombie dogs, gorilla gangsters, werewolf assassins and even a ghost train.  Throughout each, Brother Bones took on every evil with his twin blazing .45 automatics as the unstoppable vigilante.

Now Airship 27 has teamed with Chris Barnes of Dynamic Ram Audio to bring these over the top pulp thrillers to audio and in two different options.  Initially each individual tale, all to be read by voice actor Mark Kalita, will be offered to fans as individual downloads from the Airship 27 website for the low price of $2 each. The first such, “The Bone Brothers,” which tells the origin of the character is now up and available.

Barnes is not shy about his love for the character.  “When Ron Fortier approached me to produce Brother Bones : The Undead Avenger, let’s just say he was glad he was thousands of miles away, because I would quite literally have bitten his hand off.  These stories begged to be given a full audio treatment, and both Mark Kalita and I are having an absolute ball putting these together!  We hope fans will enjoy listening to them as much as we are enjoying making them.”

As each new story is completed it will also be sold separately for the $2 price.  When all seven of the tales have been completed and sold individually, Airship 27 & Dynamic Ram Audio will make the entire audio book available to fans for the sale price of $9.99, a $4 saving from the individual offerings.

“It was our idea,” explained Fortier, the Airship 27 Managing Editor, “to offer fans of the character these smaller audio files for a very reasonable fee.  Brother Bones has a huge following and we are also delighted to have several of these made available just in time for Halloween.”

THE BONE BROTHERS, an audio pulp written by Ron Fortier and read by Mark Kalita is now on sale at http://robmdavis.com/Airship27Hangar/index.airshipHangar.html.

In a few weeks a brand new edition of the book will also be available on Create Space, Amazon, Indy Planet and Kindle.
Posted by BobbyNash at 10:57 PM