HANCOCK TIPS HIS HAT TO 'SUPERHEROES VS. ZOMBIES' 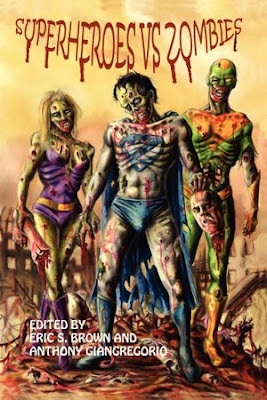 I have said this many times before and will hold this as a standard of my interest in Pulp for years to come.  Although it was not called such back in the days of the Classic Pulps and had just started its long life then, the phenomenon known as the genre mash up I think has blossomed full grown in today’s society and is a major part of New Pulp!  Seeing how writers masterfully weave two apparently disparate genres into one cohesive, knock your socks off collection always thrills me.

Except when it doesn’t.  At least not completely.

SUPERHEROES VS. ZOMBIES is a collection that mashes two things together that I feel passionately about.  One genre I am absolutely enthralled with and makes me feel like a little kid every time I read something from it.  And another that makes the bile rise in my mouth like a Baptist preacher griping because Christmas has become over commercialized and there’s just too much fat old man.  Except in this case, the fat old men are dead bodies that just won’t stay down.  Yeah, Walking Dead Fanatics, I’m not one of you.

These two genres have similarities most definitely, but at their root, there is one major difference.  Despite all of the post modern takes on the mask and cape crowd, the essence of Superheroes for me at least is that there is always one thing- The Hope that Good will overcome Evil in whatever form it takes.  Yeah, call me corny and retro or whatever, but it’s why I read comics as a kid and why I still thrill to the antics of masked types today.  Because, even in the darkest hours, they are the tiny bit that might make the difference.

Zombie stories, on the other hand, though having some of the trappings of Good overcoming Evil, tend to be more about how the World is Hell and no one’s getting out alive, except the already dead.  There’s a sense of dread, of hopeless, even in the victories.  And lately authors have gotten divided on just who should win in the end, the useless living or the rotting dead.  ‘

SUPERHEROES VS. ZOMBIES is a mix of mismatch.  The stories that fail to engage me, some of them even outright disgusting me both for content and lack of ability to blend the genres well, sadly outnumber the tales that overcome the inherent problem in blending these two.   But let’s focus on the positive.

M by Alan Spencer, Zomcomm by E. M. Maccallum, Whiz Bang by Terry Alexander, and The Heart of Heroism by Rebecca Besser are definite jewels in this book.  They portray the horror of being in a zombie-infested wasteland and balance it with the horror of being a hero, perhaps the only one in this landscape.  And don’t get me wrong; these tales don’t all end with the Zombie menace forever squashed.  What they do is balance the best parts of both genres extremely well.

Two other stories do this excellently as well, but in a very twisted way.  The Last Superhero by Anthony Giangregorio and The Detective by Kelly M. Hudson each take a well-known super hero archetype and turn it on its edge in the land of the Zombie.   Even with the way these two turn out, the basic tenets of what a Hero tries to do remains strong throughout the tale.

The others, some get close, some miss the mark for me completely.

THREE OUT OF FIVE TIPS OF THE HAT- If you could get the aforementioned stories as eBook singles, I’d definitely recommend them.
Posted by All Pulp at 6:30 AM