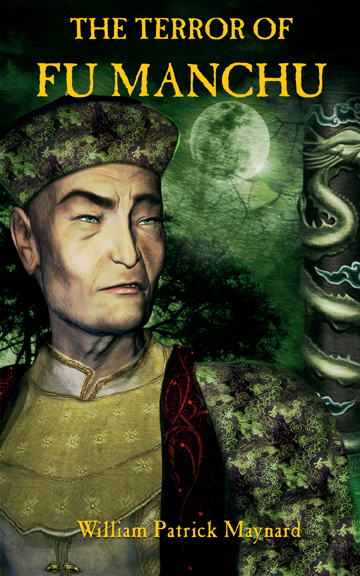 Fu Manchu is a character that has been around for a century now (the original stories first appeared in magazines in 1912 before they were collected in 1913).  Over the years the character has been subject to controversy with charges of racism.

William Patrick Maynard has some big shoes to fill writing the first authorised Fu Manchu novel in over twenty years, taking over from Sax Rohmer and his protégé Cay Van Ash. But I am really pleased that he does a great job with this novel.  It’s been some time since I last read any of the Rohmer or Van Ash novels so I can’t comment how close to the style Maynard got but this is a rattling good adventure,

The story revolves around John Daniel Eltham, a former missionary in China during the Boxer Rebellion about to publish his memoirs which are initially thought might reveal something about the history of Fu Manchu.  I was quite impressed by Maynard’s recreation of the Boxer Rebellion and I was pleasantly reminded of Moonraker’s Bride by Madeline Brent (Peter O’Donnell), that is both Maynard and O’Donnell manage to evoke similar experiences for people in the same situation at the same time.

While Fu Manchu and the Si Fan want the manuscript there is another group The Brotherhood of the Magi who also want it.  What secrets does the manuscript hold the key to? Who is responsible for the snowmen containing dead bodies found on various lawns? And who is responsible for the series of Abominable Snowmen attacks on several locations? These two new and exotic threats fit beautifully with the various threats that have been included in the series before now.

It’s interesting to see the Si-Fan fighting against a rival group.  It highlights something of Petrie and Smith’s tunnel vision that Fu Manchu initially gets the blame for everything.

Surprisingly Fu Manchu’s archenemy Denis Nayland Smith disappears in the middle portion of the book as he sends Dr Petrie to Paris to follow several leads.  Not to fear Petrie meets Gaston Max another Rohmer detective who works with Petrie during his time in Paris.

Maynard has created a really good adventure with Petrie in real danger on several occasions.  The Brotherhood of the Magi are strong enough villains that they could have carried the book on their own but they make worthwhile rivals to Fu Manchu.

Maynard has another Fu Manchu novel The Destiny of Fu Manchu now available that looks just as good.