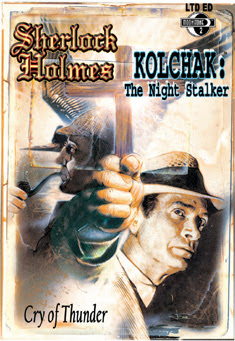 A lot of good work has been done in recent years centering around the Great Detective.   Movies, short stories, novels, and most definitely comics.  Moonstone Entertainment, Inc. went one step further a couple of years ago.  Not only did writer (and Moonstone CEO) Joe Gentile work to produce a Holmes tale in comic form, he threw in another well known character to boot.  By no means on the same level as Holmes, Frank Kolchak still stands out as a modern icon of pulp culture, investigating mysteries of the unknown long beyond his short lived tv series, thanks in large part to Moonstone. With CRY OF THUNDER, Gentile and crew threw these two characters into a pot together and stirred vigorously.

And wow, what came out was some great readin'!

After a brief prologue set in Arizona in the 1890s, the story opens with Kolchak being visited by an attractive woman who plops a mystery down in his lap, one centered around a manuscript that is a hundred or so years old.  A manuscript that mentions Kolchak by name.  And one that also details a story of Holmes and Watson working to prove whether or not a Latvian national committed a murder that he admitted to.   This story as a whole quickly blossoms to include anarchy, conspiracies, a mysterious photograph, Tombstone, Arizona, and a legend that may be more real than myth.   The story switches back smoothly between Holmes and Kolchak and balances Holmes' logical world with Kolchak's supernatural plane extremely well.

Overall, CRY OF THUNDER is an excellent read.   Gentile seems to know how to tell a story in tandem centering around two extremely strong characters and still maintain the integrity of each one.   Kolchak brims with so much life that you can actually envision Darren McGavin in the panels.  Gentile imbues him with a bit of an edge as well, making him a bit more boiled than usual and this only adds to the tale.

Holmes may not evoke Rathbone, Brett, et al in the same way Kolchak evokes McGavin, but there's a reason for that.  Within his version of Holmes, Gentile has woven all the intricacies and delicacies that other authors have either focused on heavily or left out.  This Holmes is cerebral, caustic, guarded, defensive, physical, somewhat violent in a couple of ways, driven, and protective of what little he holds dear.  In other words, this may very well be one of hte most interesting takes on Sherlock I have read or seen in a while.

Overall the art in this book fits the tale being told.  Having said that, there's a bump or two within the story, around what would have been the second issue in singles, that I can't really put my finger on.  I don't know that its the change in styles or if its the coloring, but there was something a tad distracting that fixed itself by the final part.  That coupled with a spot or two where word balloons were backwards are really the only negatives I found with this book.

CRY OF THUNDER is a satisfying mystery with an ending that not only ties up loose ends ala Holmes but also leaves just enough open to suit Kolchak fans.   The overall presentation and design of the TPB compliments the tale being told well.  Gentile and company took disparate parts, not just the two main protagonists, but Arizona and London, murder and mysticism, and others, and turned them into an incredible rousing experience.

FOUR OUT FIVE TIPS OF THE HAT-This one should be read by Holmesians, Kolchakians, and even regular types!!
Posted by All Pulp at 1:32 PM