The Ghost Wind is the first spin-off title for Granton City Press.

Following on the heels of The Ghost Wind, The Ghost Wind operates in the same fictional locale of Granton City, being a force of good in the city's Chinatown district, a place where the magic of the Far East is still a force.

In a remote monastery in the mountains of Japan young Yoshi Kobayashi is trained in the ways of the ninja, forged into a deadly weapon, his instincts and fighting prowess honed to perfection. He is the ultimate warrior. He is the Ghost Wind.

Indentured into the service of Japanese Crime Lord Hideki Yakamura Yoshi is sent halfway across the world to the glamour and madness of 1920s America and the gritty streets of Granton City. Plunged into a seedy underworld of gangsters and speakeasies Yoshi soon realizes nothing and nobody are really what they seem.

Yakamura is no mere mobster but in reality an ancient sorcerer and the target of powerful supernatural forces hungry for his power. Yoshi becomes embroiled in a dark and terrible war beyond the Veil between worlds which only he alone can put an end to.

In the climactic battle to come Yoshi is forced to choose between his duty as Ghost Wind and the woman he loves. Supported by strange allies and beset by monstrous enemies is he strong enough to stop the legions of darkness from conquering the earth when the Veil is finally torn?

The story comes from the co-writing team of Canadian Calvin Daniels and Brit Mitchel Rose, who have yet to meet face-to-face.

“Mitchel is another writer I connected with on Facebook. I saw he had an interest in Manga and thought he might be a good fit for Ghost Wind, and he has been perfect,” said Daniels.

Rose said the book, and it's follow-up The Runaway Princess which is nearing completion, has been fun.

“I've really enjoyed writing for Ghost Wind. I love pulp style adventures and I had the freedom to take it to down some pretty strange and fantastic avenues.” added Mitchel.

Ghost Wind is a young ninja who owes hie life to a local crime lord and community leader in the ‘Chinatown’ of Granton City in the 1920s.

“It’s sort of Green Hornet and Big Trouble In Little China meets The Untouchables,” said Daniels. “It’s quite unique from the other books, but has the same terms of reference.”

“A real roller coaster ride of a story.” added Mitchel.

In preparation for the book’s release, Granton City Press did some pre-selling which Daniels said was important to bolster interest in the book,and to offset initial costs. People were provided a chance to pre-purchase the book, however, not just a regular copy of the book.

Anyone purchasing a book through the offer will have an opportunity to purchase signed &_numbered editions of future Black Wolf novels with the same sequence number. That will mean ensuring every book you purchase has a matching number such as 3/100, said Daniels, adding there are a few S&N copies of The Torn Veil still available. 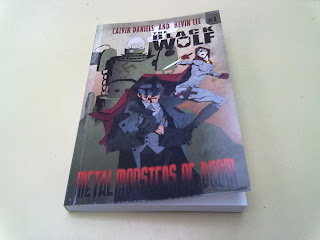 A noted mechanical engineer has gone missing in Granton City, as has a professor with a past live as an inventor of miraculous machines.
That puts The Black Wolf on the case.

The Wolf is a vigilante with a pair of Colt .45s, and the attitude that the cops in 1920s’ Granton City can too easily be bought, so he has appointed himself sheriff, judge, jury and at times executioner.

But can even a bad attitude and a loaded gun solve the newest mystery before the world is threatened by a diabolical menace?

To find out you will have to read The Black Wolf #1 - Metal Monsters of Doom, the first release from Granton City Press, and Canadian authors Calvin Daniels and Kevin Lee. The book was released in 2010, and has already been followed by Book #2 - The Demon Door.

A third volume of The Black Wolf will appear later this year.

Creator Calvin Daniels said the idea of doing pulp-era novels sort of popped into his head one day while trolling through Facebook.

“I’ve always had a soft spot for the purple clad Phantom from reading his stories in the old Charlton Comics line, and of course The Shadow, and Batman,” said Daniels who has been a journalist for more than 20-years. “But, that interest really never coalesced into wanting to write a pulp book until early last year (2009).”

So Daniels, who has previously published three books with a hockey theme, one fiction the others non-fiction, came up with a broad concept, then went looking for a co-writer.

“I had a basic idea for The Black Wolf,” he said, adding, “I thought it would be fun to share the writing.”

“I’ve known Kevin casually for a while, and I had written stories for Yorkton This Week on his fantasy trilogy TRIO, so I thought why not ask him,” said Daniels. “Thankfully he said yes.”

Lee said he decided to take on the project because it was a story quite different from his fantasy world.

“Black Wolf sounded like fun when Calvin first pitched the idea of being a co-writer with him on it, and it was an entirely different universe in comparison with my fantasy trilogy TRIO. Black Wolf is a lot shorter in length as well, which makes the story move along rather quickly. It's been fun and challenging at the same time because Calvin tends to work at a much faster rate than I do!,” he said.

Co-writing The Black Wolf has been a great experience, said Daniels.

“It’s great because we use a pretty simple system, basically taking turns writing chapters,” he said. “It really keeps you focused because you feel obligated to get back to writing every time a chapter comes in. 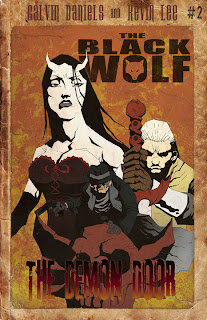 “It also keeps ideas flowing, because we feed off each other. You never know what the other will do in their chapter. It’s fascinating to watch characters and plots develop.

Lee said he too finds the process an interesting one from a writer’s perspective.

“By working on a pulp style of story instead of a fantasy setting it gets the imagination working on a completely different level because you're not thinking of sword and sorcery but more along the lines of those old crime TV shows, heroes and villains that are from our own world. Not to mention by switching up on the two stories the creative energy gets renewed each time!” he said.

The process has resulted in books the pair are proud of.

“The first book is great! After it was all said and done I found it to be fun romp and now as my third TRIO novel is nearly done my focus is back on Black Wolf #2 and the creative ideas are already beginning to roll! It should be just as fun if not better on the second go around,” said Lee.

“They may not win a Pulitzer, but pulps are supposed to be quick, easy and fun reads, and I think The Black Wolf is all three,” added Daniels.

Metal Monsters of Doom and The Demon Door both have cover art by Daniel Bradford, who is the artist of the indie comic Robot 13 from Blacklist Studios (www.blackliststudios.com).

“I fell in love with his art when reviewing his comic for Yorkton This Week,” said Daniels. “He was a friend on Facebook, so it was a natural to ask him to come on board.