PULP ARK, the creator's conference/convention hosted by Pro Se Productions, will indeed occur May 13-15, 2011 in Batesville, Arkansas.  There are many events associated with this first ever event of its type in the state, but there's one in particular that stands out.  That is THE CASE OF THE BLOODY PULP.

Envisioned as a play, BLOODY PULP is like no stage production you've ever seen.  Broken into six scenes, approximately fifteen minutes apart (Although this will be flexible), this drama will take place in the midst of Pulp Ark.  And I don't mean in one location on a predesignated stage with props and sets.  I mean while fans are mingling with vendors and guests, while books are being signed and discussions being had, this play will explode to life in the midst of all the action.   Termed 'guerilla theater', this style of production assumes that the action of the play is occurring in real time in real life and will be done as such.   So, don't be surprised to see plucky newsboys, brainwashed Nazis, strong willed females in fedoras, and maniacal madpeople walking up or busting in while you're reading pulp or drinking coffee.  It'll happen.

THE CASE OF THE BLOODY PULP centers around a mysterious story written by a Pulp author almost eighty years ago.  Only one known printing of the story, entitled the same as the play, is known to exist and the author vanished within one month of the story being printed.  Legend around this story says it contains instructions, directions, and incantations to untold power and since then the forces of good and evil have been in a race to procure it.   This almost mythical work is scheduled to appear at Pulp Ark on display, according to the script, and from there pulpy goodness will ensue.

Originally, I planned to co write the actual story the play centered around with fellow author Bobby Nash, but I've changed that plan in order to add to the mystery.  As much as this show will be about action and fisticuffs, it's also about exactly what might be in this mysterious story...and the audience may have much to do with determining that as the writer.

THE CASE OF THE BLOODY PULP is fully cast and rehearsals begin late January.  For anyone with news connections or their own sites or blogs, the cast of the show is available for interview upon request.  Simply contact me at proseproductions@earthlink.net for more details!  Bring your thirst for adventure and your need to action with you when you come to Pulp Ark in May and be ready to be a part of THE CASE OF THE BLOODY PULP! 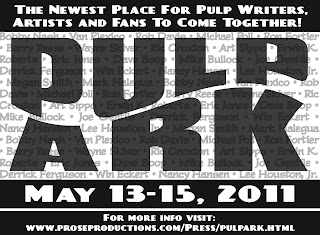