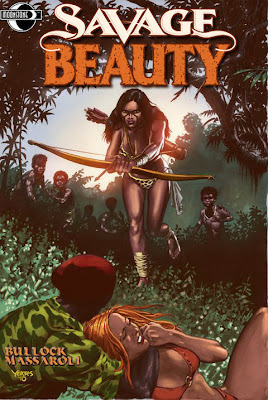 Let me preface this review by saying that in my eyes Mike Bullock is the greatest Phantom scribe since Lee Falk himself. When I heard that Moonstone was going to no longer produce Phantom comics, I figured that I would no longer find stories that mixed real-world problems with high adventure in the way that Bullock routinely did on the Phantom.

I'm glad to say that I was wrong. Bullock's new series is entitled Savage Beauty and from the early promotional artwork it seemed that this would be a jungle girl type series. It is that -- but it's also much more. The series stars two sisters who both embody the spirit of a jungle goddess (shades of the Ghost Who Walks). They spend this issue taking care of a pedophile and slavers. It's very much the kind of issue that I would have associated with Bullock's run on the Phantom -- in fact, I kept thinking that I couldn't wait for Kit to meet up with these two new heroines.

The art is good -- a bit scratchy at times but it adds a dose of gritty realism to the proceedings.

I know it's only the first issue but I would have liked to have seen more of an origin story here -- it's very much a "here are the characters, here's an adventure" kind of thing and while it's exciting enough to make me want to come back for more, I'm left with all kinds of questions.

Still, this is a remarkable debut and one that should appeal to fans of jungle girls, The Phantom or modern adventure.