THREE SURE FIRE WINNERS FOR PULPSTERS FROM BEAR MANOR MEDIA! 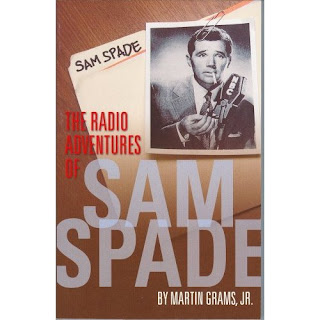 When Dashiell Hammett's THE ADVENTURES OF SAM SPADE made its debut over CBS in August of 1946, personable Howard Duff, a comparative unknown in Hollywood circles, was assigned the title role. The selection of young Duff for the hard-hitting detective was perfect casting, his success was immediate, and Hollywood began predicting important things to come for this new personality.

The enormous success of the Sam Spade radio program spawned a series of comic strips, magazine articles and radio cross-overs, not to mention numerous radio programs attempting to become just as popular with their own hard-boiled detectives. Broadcast from 1946 to 1951, THE ADVENTURES OF SAM SPADE ruled the airwaves, and fought both network censorship and the threat of Communism to remain on the air.

This book contains the following:

* A history of the radio program.
* A biography of Dashiell Hammett, Howard Duff and Lurene Tuttle.
* The origin of the fictional character and the origin of the radio program.
* Info about the Sunday funnies comic strip based on the radio series.
* Information regarding the difference between the "live" radio broadcasts and the "transcribed" radio broadcasts.
* How the radio series often broke the fourth wall and the inside-jokes.
* The events leads leading up to producer/director William Spier's fight against the networks to keep the series on the air when Hammett's suspected Communist sympathies became public.
* How and why Howard Duff was replaced by Steve Dunne.
* A complete episode guide for each and every episode of the radio program, including plot descriptions, trivia and inside-jokes.
* A reprint of "Babe Lincoln," a female detective that never came to be, and the Sam Spade connection.
* A reprint of "The Persian," an unused Sam Spade radio script.

PRIVATE EYES IN THE COMICS 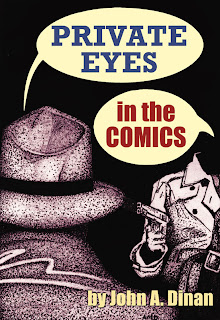 Okay, you mugs...reach! It's time for a lesson in crime from the comics, heavily illustrated and bustin' with baddies, babes and tough animals in hats!

Ever wondered what role the private eye played in comic books? Now you get your lesson: from master pulp historian John A. Dinan comes the first book on PIs in the Comics! A history and appreciation of the tough guy, the deadly dame and the dog in the trenchcoat. Illustrated.

THE DEFINITIVE HISTORY OF
THE GREEN HORNET! 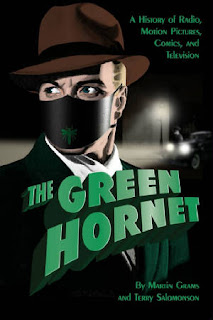 The Green Hornet was one of radio's best-known and most distinctive juvenile adventure shows. Britt Reid, publisher of The Daily Sentinel, was in the position to learn facts about criminals that only the police had access. Armed with this knowledge, a gas gun that rendered foes momentarily unconscious, and a black speedster known as The Black Beauty, he donned the guise of The Green Hornet. Feared by the underworld and sought after by the police, the masked vigilante fought racketeers, gangsters and saboteurs. When the police were faced with red tape, The Green Hornet, with his sidekick Kato, an oriental valet, circumvented protocol and legal procedure in their determined battle to put away crooks.

Since The Green Hornet first appeared on radio in 1936, he has made the transition to motion pictures, comics and television. Very little has been written about the masked marvel and what has been recorded in magazine articles and encyclopedias prior to this publication has never explored the character as deeply... or accurately. For the first time, the complete story of this crime fighter is unmasked, as prolific TV and radio historians Martin Grams and Terry Salomonson usher you into the Black Beauty.

A complete history of the radio series from the creation to conception sketches, reprints from production files to the untold adventures, biographic details of the cast and the characters they played (including Mike Axford, Kato, Gunnigan, Lenore Case, Linda Travis, Ed Lowry, Clicker Binney, Commissioner Higgins, etc.) and background information is all provided under one cover. Also included are details of the two cliffhanger serials produced by Universal in the early forties, the unaired 1952 television pilot, the long-running popularity of the comic books and the William Dozier television series (1966-67) starring Van Williams and Bruce Lee. A complete episode guide documents every adventure including unproduced scripts and plot ideas. Whether you are a casual fan or a serious enthusiast of the series, here is everything you want to know about The Green Hornet!

Numerous magazine articles, web-sites and reference guides have reprinted the same errors over the past two decades. The authors of this book have spent more than a decade researching this subject through various archival materials belonging to the family relatives who were responsible for the formation of the series. No matter what you have read in the past, this book is certain to correct all the myths and mistakes that continue to get reprinted
Posted by All Pulp at 8:14 PM