COMICS WITH HEAVY PULP THEMES FROM MOONSTONE RECEIVE ACCLAIM IN 2010!

CRITICALLY ACCAIMED 'ROTTEN' FROM MOONSTONE ONE OF BEST OF 2010! 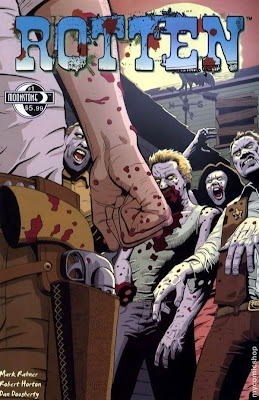 Moonstone Entertainment, Inc. announces that the wildly eclectic, genre busting comic 'ROTTEN' from writers Mark Rahner and Robert Horton and Artist Dan Dough﻿erty continues to receive accolades and notice, this time from writers at the Comic Book Bin (http://www.comicbookbin.com/).   Writers for the comic book centered site instituted their own awards this year.  Calling them 'The Binnies', writers established several comic book oriented categories and then chose the winners for each category.  ROTTEN was named as one of the six winners of Best New or Mini Series for 2010.  Comic Book Bin writer Pat Oliver selected the Moonstone title for this recognition and wrote- 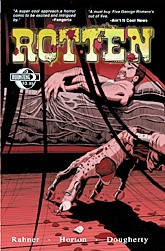 I quite liked Rotten (Moonstone) this year. Created by Mark Rahner and Robert Horton, with       artwork by Dan Dougherty, it evoked memories of the old TV series Wild Wild West, and was a nice new twist on both the western and zombie genres. Its two main protagonists are likeable, ethical men and experts in their own fields. One may be more cerebral than the other, but neither is a stranger to action, both being army men. It is a many layered comic book. For instance, it can be read as a good adventure horror story with thriller elements, or it can viewed as holding up a mirror to events in Modern society. Zombie Detective piece or political allegory, either
This excellent description and recognition of this trail blazing tale exploring new frontiers in both genre and comic storytelling is the latest in a series of compliments and praise for ROTTEN and its creative team. Others include- 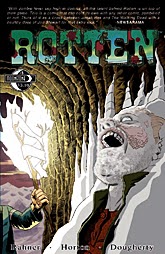 "One of the strongest and strangest concepts I've ever heard, executed with horrific precision." ED BRUBAKER
"It's Deadwood by way of Stephen King. It's Undeadwood. It's witty, it's disturbing, and it's a must-read." MARK WAID
ROTTEN is a multilayered event that at times is a western, a zombie tale, a detective story, an exploration of conspiracies, a horror masterpiece, and even a satirical comment on modern politics.   This fantastic comic adventure is now available in trade paperback from Moonstone!  Order from your favorite comic retailer today or order directly from Moonstone Entertainment, Inc. at http://www.moonstonebooks.com/


It's time for you to get ROTTEN.

ChronicleChamber.com, the leading Phantom focused site on the internet, centering on The Phantom, Mandrake the Magician, and the work of creator Lee Falk released its top 5 2010 Best Phantom portrayals and Moonstone Entertainment, Inc's Phantom work filled two of the five spots.

Quoted from the site-
Now that 2010 is behind us and 2011 has begun with the promise of bringing more great Phantom stories CC has taken a look back over the past year to see which issues came up trumps. Some of the entries may even surprise you. At any rate, it’s sure the list will cause discussion. So, without further ado we present the top five issues of 2010.

Oh, and some spoilers are contained within, so if you’ve not read these issues you may want to skip their entries...

While it might not be the greatest issue Moonstone ever produced, it is what GWW #12 represents that earns it its' place as our number 3. Moonstone’s Phantom series – both the first series and the Ghost Who Walks reboot – went from strength to strength over its' seven year run. Arguably coming of age when Mike Bullock took over, the series proved that the Phantom still mattered in a modern world and that his adventures could be just as exciting now as they were back in 1936. Ending in the culmination of all of Bullock’s previous work on the series and Moonstone’s most ambitious story arc, The Phantom: Ghost Who Walks #12 marked the end of an era. Moonstone was a company that was willing to try new things with the character and take him in new directions, all while staying true to his roots. Moonstone’s run will be remembered as one of the finest in the Phantom’s long 74 year history and GWW #12 is the issue with which Moonstone could say “look at all we accomplished.”

The reason Phantom Double Shot: KGB Noir is awarded first place is due to its simplicity. As we said in our review of issue one, putting the Phantom in a noir world seems like such an obvious idea it’s amazing no one had done it before. From the first page KGB is a rollercoaster ride of action, adventure and brutal battles. But what really sets this issue apart from the others is just how well it all fits together. While other series tried different things none felt as natural to the character of the Phantom as the noir setting of KGB. From the beautiful black and white art to the fast, brutal script, everything was pitch perfect. The greatest ideas are often those that prove to be the most simple and with this series Moonstone proved that you don’t need character evolution, status quo upset or any other myriad of things to make an awesome story. All you need is a simple idea, a top writer, a talented artist and a desire to try something just a little different.

Congratulations to Moonstone Entertainment, Inc. and all the creators involved in turning out some of the best efforts focused on one of pop culture's most beloved characters-THE PHANTOM! 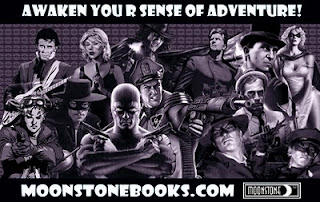 Moonstone Entertainment Inc. publishes comics and illustrated fiction designed to “awaken your sense of adventure”, featuring classic and new heroes in thrilling tales of adventure, mystery, and horror. For more than a decade, Moonstone Entertainment Inc. has created fine and distinct comic books, Graphic Novels and prose…books that are meant to be read.  Awaken your sense of adventure at http://www.moonstonebooks.com/
Posted by All Pulp at 6:44 AM