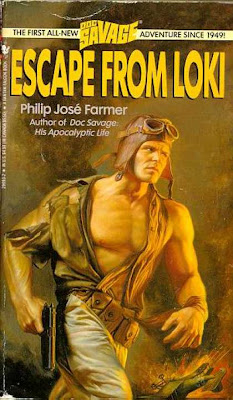 This novel has interested me for years. PJF writing the story of a 16-year old Doc Savage, telling how he met the men would become his aides in his war on crime? How could you go wrong? And yet, I'd heard many complaints over the years -- that it was "boring," "out of character" and "plodding." So I wasn't sure what to expect.

Doc, as presented here, is a much more human character than Lester Dent portrayed. He has failings and has yet to become the superman he'd destined to be. He has sexual yearnings and briefly falls prey to the femme fatale in the story. He loses his temper. He displays a fear of germs. All of these are modernized additions to his character but none of them changes the essential core of the classic Doc -- and so, for me, they work by adding layers to him. I can't stand people who alter characters without reason -- but I don't feel that's the case here.

The focus is on Doc, though his aides are presented well. The villains are interesting and the addition of a little sex spices things up: PJF does not go over-the-top as he did in his pastiches of Doc.

I found this book to be a wonderful addition to Doc Savage lore. One of the best reads I've had in awhile. The only drawback was an ugly depiction of Doc on the cover.