AP: R. P., welcome to ALL PULP! First, can you tell us about yourself, some personal background? 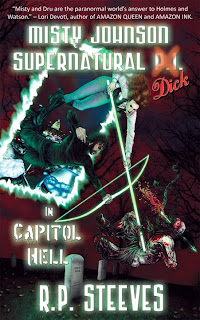 RS: I taught middle school English for 9 years, and worked for 2 years as an editorial assistant at a puzzle magazine. I have been writing my whole life, starting with plays in high school, radio dramas in college, and short stories recently. Misty Johnson is my first novel.

RS: I devour just about any kind of fiction. I love mysteries, especially Agatha Christie, whose Poirot novels are a big influence. As a kid, I loved science fiction, and the Wild Cards Series edited by George R. R. Martin was my favorite as well as anything by Douglas Adams. Nowadays I read a lot of fantasy, such as Jim Butcher and Anton Strout, two authors that have greatly influenced my own paranormal detective story. I’ve also been reading comic books since I was a kid, enjoying writers such as Peter David, Mark Gruenwald and Brian K. Vaughan.

RS: I love just about any genre, though at times, I feel a lot of tension between following the conventions of a genre and pushing the limits. Working within a genre allows a writer to play with archetypes and classic themes, but it can be tough to make a story that doesn’t feel like it’s a carbon copy of what’s come before. I’ve always been intimidated by mystery, and it was a challenge to write one, knowing I had to play by certain rules but still keep my reader guessing

RS: I’ve been a fan of pulp for my whole life without really realizing it. As a youth, I listened to a lot of classic radio dramas, such as the Shadow, which I learned later had his roots in pulp. I also read a lot of comics, gravitating toward Conan and Ka-Zar and the like. And as an adult, I’ve read many classic pulp characters as well as contemporary works in the traditional pulp genres.

RS: I like to think that I bring a certain sense of humor and levity to pulp writing. A lot of the classic pulp that I’ve been exposed to had a serious air to it, and I wanted to write a book that had visceral pulp elements but still had room for character based humor and a lighter tone than a typical urban fantasy detective story.

AP: Your first work in the pulp field is also your first novel. Tell us about MISTY JOHNSON, SUPERNATURAL DICK IN CAPITOL HELL

RS: Misty Johnson is a noir detective with a few twists thrown in. She was cursed with eternal life 900 years ago and has traveled the world, immersing herself in the ways of magic. She was a detective earlier in the century, when they were called ‘dicks’ and now she has set up her shingle once again to investigate supernatural crimes in Washington, DC. She and her partner, everyman Dru Chance, catch a case that is tangled up in both national politics and the mystical underworld.

AP: What do you think is the appeal of supernatural stories, not just to pulp fans, but overall to the reading public?

RS: Supernatural stories allow authors and readers to explore common themes from creative angles. A vampire, for example, is isolated from humanity, simultaneously shunning them and relying on them for sustenance. That’s a powerful metaphor for us regular humans who struggle with our place in society. Just about every common supernatural character and situation can be played as a variety of metaphors for the human condition. Also, supernatural stories allow us to read about cool stuff, like magic powers and items, which has a wish-fulfillment element to it.

AP: What is your creative process as far as creating a story and writing? What techniques or steps do you take?

RS: I like to think that my strength as a writer is generating ideas. I have notebooks full of ideas, some of which I’ll actually get around to expanding! I primarily write down character traits and concepts that I want to use, and when I get enough of those, I create a character who has those traits, and go from there. Misty and Dru started out that way, and then I created a world for them to inhabit and a series of challenges for them to face that will help dig deep into their characters. As a reader, I love getting to know interesting characters, so that is the start and endpoint of when I write. I then bang out a first draft pretty quickly, and then spend a LOT of time on revision, where the story itself really takes shape.

AP: What’s coming from R. P. Steeves? Any projects you want to discuss?

RS: Misty Johnson will return! She makes an appearance in an upcoming short story anthology called The Game, which will be published in the spring by Seven Realms. It features stories inspired by “The Most Dangerous Game,” and it fills in a bit of Misty’s past and hints at some challenges she’ll face in the future. The second Misty Johnson novel will be out soon, too, tentatively titles Misty Johnson, Supernatural Dick in the National Maul. It will pick up on the big cliffhanger from Capitol Hell and introduce a few more major players in the DC underworld. Beyond that, I have more Misty in mind, as well as a few ideas for sci-fi novels and a comic book story I am dying to tell, if I have time for it!