Tommy Hancock, Marketing and Promotions
moonstonepr@ymail.com
http://www.moonstonebooks.com/
FOR IMMEDIATE RELEASE-
1/22/11, Lockport Illinois-
THE AVENGER MEETS THE SPIDER FOR THE FIRST TIME
COURTESY OF MOONSTONE!
Moonstone Entertainment, Inc. proudly announces THE AVENGER: THE JUSTICE INC. FILES, Moonstone's latest anthology featuring all new adventures of one of the world's best known Pulp heroes!
This collection will also feature an event that for pulp fans has been a long time coming.


Moonstone excitedly announces that within the pages  of THE AVENGER: THE JUSTICE INC. FILES, for the first and ONLY time anywhere,  two legendary characters finally cross paths, two titans collide, two of the single greatest characters in Pulp History meet together in a hail of bullets and blood for one of the most talked about stories of the year and a Holy Grail of sorts for Pulp Fans everywhere.  In this anthology, two icons bring a whole new meaning to vengeance and adventure together..for the FIRST time...

The Avenger meets the uncompromising relentless justice of The Spider! 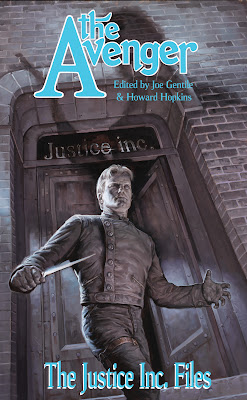 From the story-
“By the man’s actions and glacial laughter, Benson knew that this must be The Spider, a lawless vigilante whose reputation in Manhattan was well known. And after seeing the criminal in action, he thought that reputation well-earned. The man was uncommonly swift and agile, much more so than any crook he’d ever gone against. And bullets from those .45s had sped to their targets without fail, as if on wires.” 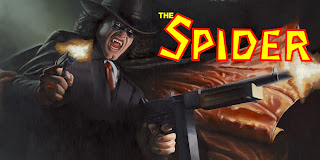 “It was at that moment that a pounding sounded on the outside doors. It was but a second’s distraction, but when Benson looked back he saw one of The Spider’s automatics beginning to rise in his direction! With no time for thought, his finger tightened on Mike’s trigger.”

Each of these classic pulp icons brings their own history, their own techniques, and their own particular tastes for justice and vengeance to this singularly epic meeting.  These aren't men who would be friends, but relentless pursuers of right, heaven help anyone who stands in their way.  The Avenger....The Spider...in the same story only in THE AVENGER: JUSTICE INC. FILES from Moonstone! 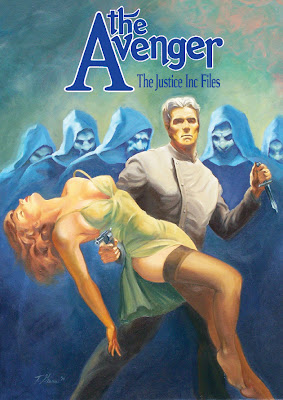 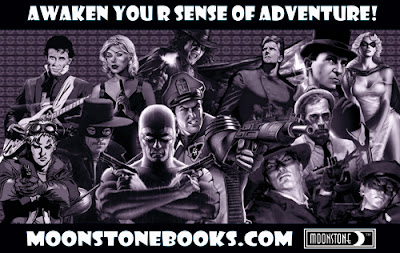 Moonstone Entertainment, Inc. publishes comics and illustrated fiction designed to “awaken your sense of adventure”, featuring classic and new heroes in thrilling tales of adventure, mystery, and horror. For more than a decade, Moonstone Entertainment, Inc. has created fine and distinct comic books, Graphic Novels and prose…books that are meant to be read.  Awaken your sense of adventure at http://www.moonstonebooks.com/
Posted by All Pulp at 8:56 AM