ALL PULP is glad to introduce any of you who don't know already to one of the best publishing houses for books on pop culture icons and various mediums, including old time radio ,movies, tv, and more. Bear Manor Media has been producing top notch publications for years and is a little known resource for research and inspiration for pulp writers and creators!  Many of the subjects they address, primarily actual entertainers and movers and shakers, were at the heyday during the period many pulp writers choose to write in.  These works also give great insight into not only what people did for entertainment, but they provide glimpses into what life was like in various eras, always good stuff for a Pulp writer to have on hand.  Bear Manor Media will be sending press releases to ALL PULP and reviews and interviews will be forthcoming.  To welcome Bear Manor to ALL PULP, there will be several snippets today about books already in their catalogue...If interested in any of them just make your way to http://www.bearmanormedia.com/ and order today!  There's a ton to choose from...like this jewel here-

WHAT IF THEY LIVED? 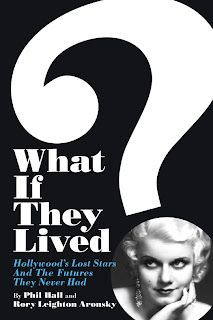 They were the big screen royalty that left us too soon - the brilliantly talented icons whose premature deaths continue to fill the hearts of movie lovers with rue and pain. From Robert Harron and Rudolph Valentino of the silent era to Heath Ledger and Natasha Richardson of today's cinema, the history of movies is filled with too many legends and rising stars who died before fulfilling their career destinies.

But what would have happened if fate had been kinder? What could have been the careers of Jean Harlow, James Dean, Marilyn Monroe, Dorothy Dandridge, Bruce Lee, John Belushi, River Phoenix, Chris Farley, and many other screen luminaries who died too soon?

What if They Lived? offers a speculative trajectory for the careers that the late, great stars never had. Piecing together pending film projects, industry trends and wider shifts in popular culture, What if They Lived? considers what could have happened to the beloved movie actors who never had a chance to enjoy a long and fruitful professional output.

About the Authors
Phil Hall is the author of four books, including Independent Film Distribution (2006) and The History of Independent Cinema (2009). He is a contributing editor for Film Threat and his writing has appeared in the New York Times, Wired Magazine and American Movie Classics Magazine. He is a member of the Governing Committee of the Online Film Critics Society.

Rory Leighton Aronsky has written movie reviews since early 1999, first for the South Florida Sun-Sentinel, in the Teentime pages of their weekend Showtime section, then The Signal newspaper in the Santa Clarita Valley in Los Angeles County, and for the online sources Film Threat and Screen It. He has been a member of the Online Film Critics Society, and served for three years on its Governing Committee. This is his first book.
Posted by All Pulp at 5:52 AM