FORTIER REVIEWS THE 'GONE WITH THE WIND' OF MODERN PULPS! 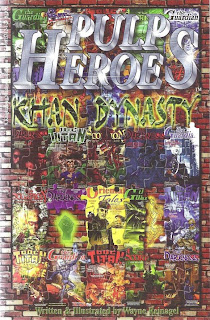 Calling this thick hunk of book the “Gone With The Wind” of pulps would be no exaggeration at all. Detailing, and intertwining the lives of dozens of heroes and villains from both the 19th and 20th centuries, Wayne Reinagel has delivered a book that is pure treasure chest of action and adventure delights.

With KHAN DYNASTY, Reinagel takes a jump backward in time to showcase the birth of America’s most famous pulp and comic book heroes of the 1930s. To do so he weaves such classic figures as Jekyll and Hyde, Sherlock Holmes and Fu Manchu together in an incredible globe spanning saga; although some have their names changed due to licensing restrictions. Still the acute pulp fan will easily identify such stalwarts as Doc Titan and his five loyal companions, the Darkness, the warrior who fights in the shadows and the deadly Scorpion, who’s automatics blaze a trail of death and destruction in meting justice to evil doers. These were the same characters we were first introduced to in PULP HEROES – MORE THAN MORTAL, his first entry in this mammoth trilogy; although it is the second chapter of the saga.

We personally wish he would have launched this Magnus Opus with this volume for several reasons. The obvious would have been the natural progression of the characters’ history would have made following events a whole lot easier. Secondly, as much as we enjoyed MORE THAN MORTAL, it had many narrative bumps. We were thrilled to see these gone in KHAN DYNASTY as Reinagel’s earlier amateurish style and awkward phrasing have been replaced by a smooth, easy and very professional writing competency. This bodes very well for his proposed third volume due out later this year.

No one does historical research better than Reinagel and his books are clearly the results of hours of meticulous study. Having embraced the late Philip Jose Farmer’s wonderful Wold Newton concept of classic heroes and villains being somehow related to each other via one amazing family tree, Reinagel takes that supposition one giant step further and details every single minutia on every single branch of that tree. Which is also the book’s clear weakness in that he is easily tempted by factual history and spends way too many pages relating little known historical data that have absolutely no relevancy on the book’s plot. This volume could have trimmed fifty pages of such fat and moved things along at a faster clip. But don’t get me wrong, there’s still tons of action and adventure packed into this story, more then enough for any ten regular pulp novels.

Clearly, books like KHAN DYNASTY are not for the casual reader just discovering pulps. Whereas, if you are a true fan who has rudimentary knowledge of this unique literary genre and its more famous characters, then it would behoove you to pick this up. It will provide you with a reading experience unlike any you’ve ever enjoyed before.