“A Nova of Genetic Splendor”
By Win Scott Eckert

On December 13, 1795, at 3:00 p.m., a meteorite came plunging to the earth, landing near the English village of Wold Newton. The impact site became part of the local folklore in the countryside of the Yorkshire Wolds in the East Riding of Yorkshire. Pieces of the Wold Cottage Meteorite(1) are held at the London Natural History Museum, and in 1799, Edward Topham built a brick monument to commemorate the event:


On this Spot, Dec. 13th 1795
fell from the Atmosphere
AN EXTRAORDINARY STONE
In Breadth 28 inches
In Length 30 inches
and
Whose Weight was 56 Pounds
THIS COLUMN
In Memory of it
was erected by
EDWARD TOPHAM
1799

History also records that several people observed the object in the sky. “Topham’s shepherd was within 150 yards of the impact and a farmhand named John Shipley was so near that he was forcibly struck by mud and earth as the falling meteorite burrowed into the ground.” (Wold Cottage, < http://fernlea.tripod.com/woldcottage.html>). A contemporaneous account observes that:

What many historians fail to adequately record is the presence of eighteen other persons in the  immediate vicinity at the time of the Wold Newton meteor strike. We know about these eighteen people through the extraordinary and singular work of one historian. This historian, in fact, has engaged in a rather in-depth treatment of the subject in two scholarly biographical tomes. However, and despite the fact that this historian’s biographies are often appropriately shelved in the Biography section of libraries, his revelations are generally regarded as “fictional.” 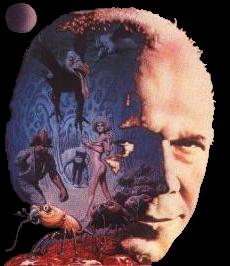 The historian to whom I refer, of course, is Philip José Farmer, and the biographies of which I speak are Tarzan Alive: A Definitive Biography of Lord Greystoke and Doc Savage: His
Apocalyptic Life. In the course of his researches into the life of Lord Greystoke, Farmer extensively traced the Jungle Lord’s ancestry, and came to discover that the Ape-Man was closely related to several other august historical personages. The nexus of this relationship was the Wold Cottage meteor strike in 1795.

As Farmer uncovered, seven couples and their coachmen “were riding in two coaches past Wold Newton, Yorkshire.... A meteorite struck only twenty yards from the two coaches.... The bright light and heat and thunderous roar of the meteorite blinded and terrorized the passengers, coachmen, and horses.... They never guessed, being ignorant of ionization, that the fallen star had affected them and their unborn.” (Tarzan Alive, Addendum 2, pp. 247-248.)

The eighteen present were(2):

The meteor’s ionized radiation caused a genetic mutation in those present, endowing many of their descendants with extremely high intelligence and strength. As Farmer stated, the meteor strike was “the single cause of this nova of genetic splendor, this outburst of great detectives, scientists, and explorers of exotic worlds, this last efflorescence of true heroes in an otherwise degenerate age.”(3) (Tarzan Alive, Addendum 2, pp.230-231.)

In the time since Mr. Farmer conducted his groundbreaking genealogical research, many researchers have followed in his footsteps. In future columns we will present more ruminations on Mr. Farmer’s landmark research, as well as delve into the continuing investigations of those whom he inspired.

(1) The meteorite is named after The Wold Cottage, the house owned by Edward Topham, who was a poet, playwright, landowner, and local magistrate. Apparently Magistrate Topham was instrumental in the Wold Cottage meteorite’s role in promoting worldwide acceptance of the fact that some stones are not of this Earth. The Wold Cottage is still privately owned, and is currently the site of a micro-brewery where one can procure the local brew, Falling Stone Bitter.

(3) Of course, not all the Wold Newton Family members were heroes. Some turned the genetic advantages with which they had been blessed toward decidedly nefarious pursuits
Posted by All Pulp at 5:54 AM