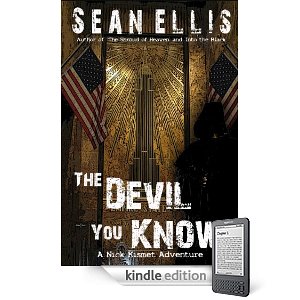 Author Sean Ellis announced today that a new edition of his Nick Kismet novella, The Devil You Know, is available on Amazon.com. Currently priced at 99 cents Ellis commented that there would possibly be opportunities to get it for free in coming weeks.  He also announced that Into the Black will probably be out in a 10-14 days as an ebook, with print to follow in a few months.
From Amazon.com-
Nick Kismet, the unstoppable hero of The Shroud of Heaven returns in a novella-length thriller.

Kismet's search for the shadowy Prometheus group turns a corner when he receives an invitation to meet a mysterious informant. But instead of answers, he finds a beautiful reporter, hunted by vicious kidnappers and a fallen priest wielding the unholy power of the Judas Rope.

Also includes Bonus Material of excerpts from The Shroud of Heaven, as well as the next Nick Kismet adventure...Into the Black!
PULPWORK PRESS AND JENKINS RETURN TO DIRE PLANET!!
From Joel Jenkins' blog- 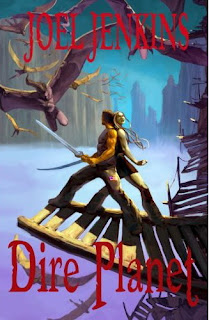 " …I finished writing Lost Tribes of the Dire Planet and it now stands at 128,000 words of pure pulp sword and science fiction. This books ran somewhat longer than the other Dire Planet novels as I had a multitude of plot threads and story lines which needed some resolution.

Between Strange Gods of the Dire Planet and Lost Tribes of the Dire Planet I've been living on the Dire Planet for over a year. Now the hard work begins--the brutal editing and revision process. Because the two novels are closely knit together I'll be editing them consecutively before submitting them to Pulpwork Press--after which they will undergo yet further editing.

Strange Gods is slated for a 2011 release and Lost Tribes of the Dire Planet for a 2012 release. Of course, the first three Dire Planet books are available at PulpWork.com, Amazon, and Barnes and Noble."

COLD WAR HEROES by Tom Johnson
Pulp goes Top Secret in this military comedy drama set in Europe during the height of the Cold War. A group of misfit MPs must confront spies and the black market while dealing with a boxing tournament on Post! Not since M*A*S*H* and Soldier In The Rain have we been treated to an inside look at military life with a touch of humor by a soldier who actually experienced it.
COLD WAR HEROES by Tom Johnson is loosely based on the author’s experience with the 202nd Military Police Company in France during the 1960s.
Coming in early 2011 from NTD Books.
Posted by All Pulp at 6:03 AM