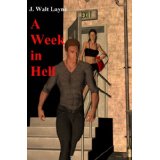 A young flatfoot gets more than he bargained for when called to shake out a brawl. The fight was long gone, but the barmaid was there, cooling. She was coming on like the bedroom flu, he got her digits. She had his number.

Acclaimed author J. Walt Layne kicks off his Champion City series with A Week in Hell (113 pp., tpb, $6.99), an introductory thrill ride across the tracks into the seedy, hardboiled side of a dying blue collar city. Layne first charmed readers in 2006 with Frank Testimony, his deeply effective legal thriller. His small but loyal following tantalized with the promise of the forthcoming series, shall wait no longer.

J.T. O’Connor, author of The Coming of T’Loal, says, "J. Walt Layne is an apt student of the hardboiled style: a bit more literary than Chandler but every bit as hard hitting as Cain and Spillane. He has moved out of literary shadow land and onto the mean streets of Champion City. A Week in Hell will hit you right in the mouth!”
A Week in Hell (Champion City Series #1) hits the ground running.. Beat cop Thurman Dicke makes rounds by day during the hottest July on record. A routine call to sort out a brawl will change his life and what he thinks he knows about the rackets forever.

Editor Shell Wilbye says of Layne's hardboiled debut: "This is a cracking story. Congrats on writing your best so far. An EXCELLENT job...”
J. Walt Layne works as a Substitute Teacher and Home Economist in Springfield, OH. He studied Business and Human Services at Urbana University. He is currently marketing several books and working on his current series. Layne maintains a presence on Facebook and is re-launching his blog at http://championcityontheweb.blogspot.com/.