HANCOCK TIPS HIS HAT TO FARMER'S AND ECKERT'S PEMBERLEY HOUSE! 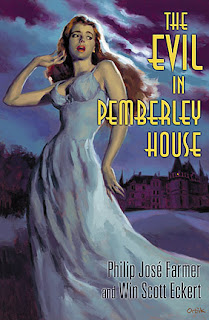 If you're a reader of All Pulp, especially recently, then you're familiar with the concept of the Wold-Newton Family and Universe as well as knowing a bit about pulp and science fiction icon Philip Jose Farmer.  Although Farmer left this world in the last few years, a vast body of notes, ideas, completed and unfinished works remain in his fantastic wake.  THE EVIL IN PEMBERLEY HOUSE was, until recently, on the unfinished list.  Fortunately, writer and PJF expert/researcher Win Scott Eckert picked up the gauntlet unintentionally left by Farmer's passing and THE EVIL IN PEMBERLEY HOUSE is now complete.

And, oh boy, that is a good thing.

The basic plot is that young Patricia Wildman, daughter of famed crimefigher, scientist, and general all around genius Doctor James Clarke Wildman, finds out she has inherited an estate, the Pemberley House of the title, and all the wealth and possibly titles that go with it.  Recently widowed and having lost her parents as well, Patricia welcomes the distraction of going abroad and sorting out this inheritance.  Mayhem instantly ensues with attempts on her life, introductions to rather repulsive family members and Pemberley residents, kidnapping, and rape.  Oh, wait, then there's the curse that a ghost of long dead relative revisits for three nights on the anniversary of her death to a person in her direct lineage.  And, yes, that would be our young heroine.

Farmer and Eckert weave a gothic tale that is punctuated throughout with pulpy goodness.  Patricia Wildman is actually a thin, almost transparent mask worn by the main character who is actually the daughter of Doc Savage.  Inherent in this character is all the strength, description, and vitality that comes through in tales of Doc, tempered by a rather human fallibility, one of which I'll speak more of in a bit.  The characters around Patricia, though most of them are repugnant and dare we say irredeemable, add gaudy, fascinating color to this tale of intrigue, family secrets, conspiracies, murder, and even on some level vengeance.  Throw in the fact that this is Wold-Newtonry at its best and you get Sherlock Holmes, Sexton Blake, Jane Austen characters, and Tarzan, among many others salted and peppered from beginning to end.  The phrasing and structure is definitely Farmer and there is mostly a seamless line between Farmer ends and Eckert begins. The only drawback I encountered with THE EVIL IN PEMBERLEY HOUSE related to the focus on sex, especially early in the book. Now, I know that there has been and will likely always be much discussion of Farmer's use of sexual activity and connotations in his books, starting with 'The Lovers' and filtering through various other works.  Patricia's human fallibility relates to sexual issues and this is made glaringly apparent through almost the first half of the story and although reinforcement is necessary in a novel, this felt heavy handed and forced on the reader at times.   This definitely improved as the book went on and the resolution that the end brought to these issues was complete and satisfying, but there is some concern that readers who might be turned off by sexual descriptions and such would stop reading too soon.  DON'T! There is tons of action, adventure, character interaction, and dramatic tension still to come!!

All in all, THE EVIL IN PEMBERLEY HOUSE stands out as a fantastic addition to the works of Farmer.  Eckert deftly delivered a complete tale with enough dangles to have another tale or two yet to tell.

FOUR OUT OF FIVE TIPS OF THE HAT-Definitely one worth reading and rereading, even if the sexual references get a bit heavy early on.
Posted by All Pulp at 8:27 AM