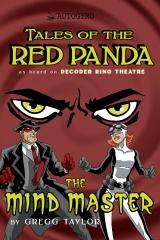 I think readers and reviewers alike have certain expectations about the second book in a novel series.  We, because I am one of each, always hope that the book following the debut of a series will at least equal its predecessor in quality, if the debut book was indeed good, yet we are often disappointed, not always greatly so, but usually disappointed that the follow up book just doesn't quite stand up to what came before it.

TALES OF THE RED PANDA-THE MIND MASTER is the second in the TALES series from Taylor starring his Decoder Ring Theatre character, The Red Panda, and his unflappable sidekick and chauffeur, the Flying Squirrel.   This book not only adds on what has already been established both via the audio programs and the first novel in the series ,but it pulls back curtains and allows readers sneak peeks into the Panda's past, letting us know a little bit of what made the man behind the mask the hero we know and cheer today.

Like the first novel, this plot is pretty simple.  A new criminal force has moved into Toronto and has two goals-to charm and work his way into control of the city through the rich and mighty as well as the criminal element; and to find the one individual who may equal his very own mind centered abilities and could be the only person who might stop him.  That person turns out to be The Red Panda! 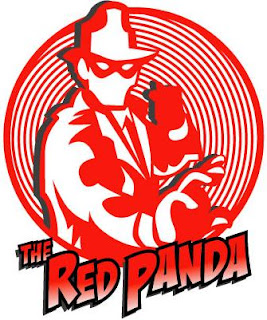 THE MIND MASTER delivers action, adventure, revelations, and the great banter back and forth between the Panda and the Squirrel, the Panda and the bad guy, the Panda and...everyone else in it that has become a trademark of DRT's work thus far.  Something that stands out about this book, though, is the villain himself.  Not only does this character stand as a near equal to our hero throughout the novel, but he's also a good foil, a twisted mirror image of what the Panda might be should he ever make the wrong decisions.  Seeing this sort of confrontation adds a depth to the Panda that makes the conclusion of the book that much more satisfying.   Also, the glimpses into how Panda went from pampered playboy to pulp hero were great trimming around an all in all complete adventure.

FIVE OUT OF FIVE TIPS OF HANCOCK'S HAT-Pulpy goodness again.  This stands up alongside its parent book and stands there very well.
Posted by All Pulp at 12:04 PM