SIX DEGRESS OF PJF BY WSE!!!

Last column we discussed the great genealogist Philip José Farmer’s discovery of the “Wold Newton Family,” – highly influential people, many heroic, and some villainous, whose lives are chronicled in the guise of popular literature. While Farmer wrote critical essays and serious biographies in which he revealed his researches, he was also not above divulging more of his findings under the guise of popular fiction.
A full survey of Farmer’s Wold Newton “fiction” is beyond the scope of this column, so I will focus here on a few key pieces which reveal that, beyond the Wold Newton Family (WNF) proper, there is indeed a whole “Wold Newton Universe” (WNU) ripe for exploration. In fact, if one follows the trail of connections through his fiction, one is lead to the most astonishing places.

For instance, after reading Tarzan Alive and Doc Savage: His Apocalyptic Life, one might not be surprised to find in Farmer’s novel The Adventure of the Peerless Peer that Tarzan, Sherlock Holmes, Mycroft Holmes, The Shadow (“Colonel Kentov”), and G-8 (“Wentworth”) shared an adventure together. One might not even be surprised that three other WNF members are mentioned: Leftenant John “Korak” Drummond, Lord John Roxton, and Allan Quatermain. But one might be taken aback to also see Dr. Gideon Fell and Henry Merrivale, two renowned detectives whose cases were recounted by John Dickson Carr. Farmer never mentioned them as Family members, but surely their appearance is indicative that sleuths in the larger WNU are not limited to WNF members.

Farmer also wrote two novels of pre-history, Hadon of Ancient Opar and Flight to Opar. In these, he discovered connections between the lost city of Opar from Burroughs’ Tarzan novels, and the novels of H. Rider Haggard. In a later interview, Farmer revealed that Hadon’s son emigrated south and founded the city of Kôr, from Haggard’s She. He carried with him a huge axe made of meteorite iron, which was eventually passed down to Umslopogass, the great Zulu warrior, who shattered it in the city of Zu-Vendis (Haggard’s Allan Quatermain). In this way, Farmer revealed that the WNU has a rich history beyond the WNF. 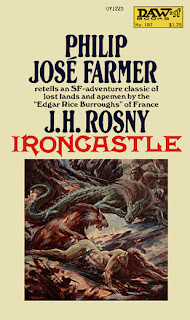 In Farmer’s translation of J. H. Rosny’s Ironcastle, he adds references to several WNF members, including Phileas Fogg, Sherlock Holmes (through a reference to the Diogenes Club from the Holmes stories), Joseph Jorkens, Doc Savage (although the reference in Ironcastle is really to Doc’s father, Dr. Clark Savage, Sr.1), and Professor Challenger (through a reference to the South American expedition from Doyle’s The Lost World). Sir George Curtis also appears; he is the nephew of Sir Henry Curtis from H. Rider Haggard’s Allan Quatermain novels. Farmer states that Hareton Ironcastle is related to Professor Porter, Jane’s father from the Tarzan books.

An interesting new element that Farmer adds with this crossover is the Baltimore Gun Club. This means that some version of Jules Verne’s novels, From the Earth to the Moon and The Purchase of the North Pole (aka Topsy Turvy), take place in the WNU. Since Verne’s works are also interconnected, this means that other Verne novels such as Hector Servadac, The Adventures of Captain Hatteras, and The School for Robinsons (aka The School for Crusoes) occur within Wold Newton continuity.

Farmer’s novel of young Doc Savage’s first adventure, Escape from Loki, added many other elements to the WNU, as seen from this excerpt from my Wold Newton Universe Crossover Chronology:

ESCAPE FROM LOKI
Clark “Doc” Savage, Jr., meets his friends and associates Ham Brooks, Monk Mayfair, Renny Renwick, Long Tom Roberts and Johnny Littlejohn in the German prison camp Loki. There is mention of a “worm unknown to science,” which can be demonstrated to be a direct link to the Cthulhu Mythos. Doc’s tutor in mountain climbing, yoga, and self-defense, Dekka Lan Shan, is the grandfather of Peter the Brazen. A character named Benedict Murdstone also appears. Savage & Co. meet Abraham Cohen, who would go on to membership in Jimmie Cordies’ band of mercenaries, and an Allied prisoner named O’Brien, a soldier of Irish extraction. It is also mentioned that Doc Savage was trained by an aborigine, Writjitandel of the Wantella tribe. And Doc’s Persian Sufi tutor is named Hajji Abdu el-Yezdi.

Escape from Loki is a novel by Philip José Farmer, Bantam Books, 1991. The “worm unknown to science” was first referred to in Watson’s / Doyle’s “The Problem of Thor Bridge,” and was followed-up on in Harry “Bunny” Manders’ Raffles tale (edited by Philip José Farmer), “The Problem of the Sore Bridge - Among Others.” Peter the Brazen, aka Peter Moore, was an adventurer in pulp stories written by George Worts. Of Peter the Brazen, Wold Newton scholar Rick Lai adds, “One of Worts’ Gillian Hazeltine stories mentions a ship, The King of Asia, which also appears in the Peter the Brazen stories. Worts’ Singapore Sammy story, “South of Sulu,” mentions that Sammy was friendly with a jewel trader, De Sylva. This may be the same character as the jewel merchant, Dan de Sylva, who appears in a later Peter the Brazen story, “The Octopus of Hongkong.”

Murdstone is related to the family which appears in Charles Dickens’ David Copperfield. The Jimmie Cordie adventures by William Wirt are a series of twentyone stories about a group of mercenaries in the Far East after the Great War. Rick Lai adds: “O’Brien is probably Jem O’Brien, ex-jockey, exconvict, decorated soldier in the American army during World War I, and special assistant to the Scarlet Fox. Created by Eustace Hale Ball, the Scarlet Fox was a pulp hero who appeared in seven stories in Black Mask during 1923-24. The first six stories were published as a novel, The Scarlet Fox, in 1927.”

In Arthur Upfield’s novel about the Australian detective, Inspector Napoleon “Bony” Bonaparte, No Footprints in the Bush (1940), a major character is Writjitandil (Farmer changed an “i” to an “e”) of the Wantella tribe. Rick Lai writes again: “In an introduction to an edition of an Upfield novel which does not feature Bonaparte, The House of Cain (Dennis McMillan, 1983), Philip José Farmer speculated that Bonaparte was the illegitimate son of E. W. Hornung’s A.J. Raffles. In Upfield’s novels, Bonaparte is illegitimate son of an unnamed white man and an aborigine woman. Upfield’s early novels suggest that Bonaparte was born in the late 1880s. Raffles was in Australia about that time according to Hornung’s ‘Le Premier Pas.’”

Chris Carey points out that “Sir Richard Francis Burton (the real-life protagonist of Farmer’s Riverworld series) wrote a curious book entitled The Kasîdah of Hâjî Abdû El-Yezdî. At the time the volume was first published, Burton claimed to be merely the translator of the wise Sufi’s work. However, the truth finally came out that Burton wrote it. While Haji Abdu El-Yezdi may be a fictional character in our world, we may only assume that he existed in flesh and blood in Farmer’s Wold Newton Universe.”

One never knows when additional information from Farmer’s researches will come to light. His tale “After King Kong Fell” clearly takes place in the WNU because WNF members Doc Savage and The Shadow arrive on the scene in the aftermath of the giant ape’s plummet from Doc’s headquarters, the Empire State Building. That King Kong exists in the WNU may be old news to some.

Imagine, then, the glee with which a “Farmerphile,” who thinks that there are no new Wold Newton connections to be revealed in Farmer’s work, learns that he is wrong. The young protagonist who is visiting New York during the 1931 events of “After King Kong Fell” is one Tim Howller of Peoria, Illinois, age thirteen. A newly discovered Farmer short story, “The Face that Launched a Thousand Eggs” (published for the first time in Farmerphile No. 1, July 2005), features nineteen-year-old Tim Howller. The story takes place in 1937. It undoubtedly features the same Tim Howller from “After King Kong Fell,” and what’s more, “The Face that Launched a Thousand Eggs” is semi-autobiographical.
The inescapable conclusion is that Philip José Farmer himself witnessed Kong’s plunge from the Empire State Building. And if that doesn’t enhance our understanding of the inter-tangled history behind the Wold Newton Universe, then I don’t know what does.

1 To be perfectly accurate, the real name of Doc Savage’s father, as Farmer demonstrated in Tarzan Alive and Doc Savage: His Apocalyptic Life, is Dr. James Clarke Wildman, Sr.
Posted by All Pulp at 6:08 AM