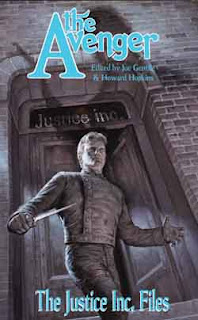 Now that Moonstone has announced the release of their second Avenger prose anthology, JUSTICE, INC., I believe I'm free to spill the beans on my story for them in this collection. I'd honestly been disappointed
not to make the cut for the first collection, as I'm a huge Avenger fan. Joe Gentile was well aware of this and when it came time to put together a second volume, he gave me a holler.

Having picked up the first book and loving every single story in it,  I knew the bar had been set pretty high and wanted to contribute something truly special for all the fans of Richard Henry Benson. And that was how I came up with the idea of writing the origins of Benson's  two unique weapons, Mike & Ike.

In the first Avenger novel, "Justice, Inc.," Benson sends his new ally, the dour Scotsman, Fergus MacMurdie, to fetch a box from him from a certain address. When Mac returns and hands him the box, we discover
it contains a very thin throwing knife and an ever rarer pistol so slim as to resemble a small piece of bended steel. Benson calls the blade Ike and the gun, Mike.

And that was it. No further explanation of where they came from or the story behind them. Or ever where Mac went to retrieve them? Yet all of us fondly recall them and how efficiently they were put to use in
adventure after adventure. It was a missing piece of the puzzle no one had ever bothered to fill in. Till now.

When I suggested to Joe I wanted to write the origin story of Mike & Ike, he was delighted and immediately gave me the go-ahead. The result was "Vengeance Is Mine," a story from Richard Benson's past, long
before he became the haunted, crusading crime fighter. With the help of both Joe and co-editor Howard Hopkins (the world's biggest Avenger fan) we were able to take my idea and shape it into a story that at long last reveals the background of  the Avenger's iconic weapons.

That this story should appear in the volume named JUSTICE, INC., somehow seems only right.
Posted by All Pulp at 2:03 PM