TIPPIN' TO THE RED PANDA A THIRD TIME TODAY-HANCOCK AND HIS HAT! 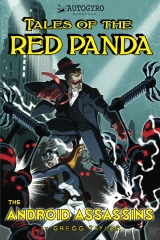 A series of novels in any field is only as good as its basic components-Its writer, its characters, and the fact that it's not a retread of the books that have come before in plot.   By those standards, the third novel in the TALES OF THE RED PANDA series, THE ANDROID ASSASSINS, is really good.

Let's take the last point first, at least in part.  Here's the plot in short-Millionaires are being threatened and essentially blackmailed by an unseen villain.  At the same time, Toronto is beset by robotic roustabouts credited to a mechanical, maniacal madman familiar to the city.  And there to bridge the gap in both of his identities and with the Flying Squirrel at his side stands ready-THE RED PANDA!

Once more Gregg Taylor brings the stalwart pulp masked man and his spunky partner to the written page in grand style.  There is more than enough fighting, arguing, and sparring within these pages to satisfy any Decoder Ring Theatre fan and that's just between the Panda and the Squirrel!  Taylor does a wonderful job of balancing these over the top characters with more realistic supporting cast, particularly when dealing with Red Panda's many agents.  There are plenty of heroics to go around in this tale of justice and robots and Taylor is excellent at making sure everyone gets a chance to be either as good or as bad as they choose to be.

Taylor almost paints pictures as he constructs characters in this book.   The Panda and the Squirrel spring from the page fully realized, but this is no surprise if you've read the previous two books and/or listened to DRT's shows.  What is even more stunning is how the characters that we aren't very familiar with take on a life of their own.  There's some 'spoilers' in this book on things that will take place in the Panda's future that DRT listeners will pick up on and those hints don't lie in the plot, but in the characters that Taylor applies liberally and lastingly to his own special canvas.

Speaking of art, although the covers on the last two TALES books were good and eye catching, the cover of ANDROID ASSASSINS by Thomas Perkins is simply...wow.  It evokes a comic book like feel, yet has something about it that reminds me of classic pulp covers.  The emotions apparent in the Panda's face, the grace of the Squirrel's combat, and even the raw electricity of the androids pop and live on this cover.  Well done, Mr. Perkins.

THE ANDROID ASSASSINS fell slightly short, however, of its two predecessors.  Without saying enough to spoil it, the introduction of and build up of the mystery at the center of the entire plot was a bit clunky.  Taylor's transitions and exposition, especially in the first half of the book, lacked a touch of the smoothness of execution so evident in the first two entries in the series.  By the middle of the story, however, Taylor was in fine form once more, making the story flow like fine wine.

FOUR OUT OF FIVE TIPS OF THE HAT-Even if it doesn't quite pass the bar set by Taylor already, this one definitely leans hard on said bar and is one heckuva fun read.   The Panda and Squirrel are old friends to the reader that has followed them through all three books by this point.  And it feels good to read an old friend.
Posted by All Pulp at 9:01 PM