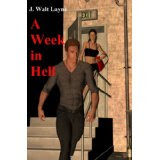 This was my introduction to the work of J. Walt Layne and it was an interesting experience. A Week in Hell is billed as the first book in the Champion City series and it stars a young cop named Dicke who quickly gets in over his head when he's called out to the White Walls Tavern to investigate a bar brawl. He ends up getting involved with the saucy barmaid on duty and becomes the target for killers along the way. This is written in the hardboiled style, though the language is very contemporary and extremely adult.

The plot itself is fairly predictable fare but I'm okay with that -- as a pulp fan, I understand the desire and need to incorporate certain tropes into the work. For me, it's more about the presentation than the novelty. So how does this book fare in terms of presentation? Honestly, it's a mixed bag. There are passages here that are absolutely wonderful, capturing the dirty, sweaty nature of the characters perfectly... but then there are phrases that fall past "hardboiled" and straight into "vulgar."

Now, folks who know me are aware that I don't mind extreme violence, profanity or sexual description (hell, I used all to the extremes in my slasher horror novel)... but there's a way to do it that doesn't descend into self-parody and there are times here when I feel the author goes a bit too far. For instance, this is how the female lead of the story is introduced to us:

"What'll ya have," she purred in a seductive voice that screamed p*$$y.

Note that I tried to avoid offending any sensibilities of the All Pulp crowd in the above sentence. I get what he was going for -- he wanted us to know that she was seductive and maybe a little bit loose in her morals. But I think it could have been phrased in a way that would have been both "hardboiled" and not as crass. I read that sentence to my wife and she nearly went ballistic over it.

There are other examples that I could have used but that one was useful because it occurs on the second page of the story. It's moments like that which stopped me cold as a reader and took me out of the narrative. Even though I'm a writer myself, I shouldn't be constantly going over in my head different ways the author could have phrased things.

Despite that recurring problem with the book, I did find myself curious about what was happening and whether or not the two main characters would end up together. I won't spoil the ending but it fits well with the hardboiled genre, though it wasn't the ending I was hoping for.

Overall, I think that this author has tremendous talent and I am curious to see what comes next in the series. There is certainly room for growth, however, and I'm hopeful that Mr. Layne will take steps to improve on his weaknesses. From the news release I've seen, he has a previous novel to his credit (Frank Testimony) and I'm going to seek it out before passing final judgment on his ability.