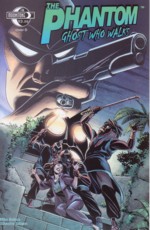 AP: Silvestre, thanks for taking time to sit down with All Pulp.  Before we jump head first in, how about telling us a little bit about yourself?

SS: I'm just a guy who loves drawing cars, trains and telling stories
in comic book form, but I love all kind of story-telling, mainly with
images (Movies, TV Shows, even some advertisement.) I've been drawing
ever since I was a kid, and began drawing amateur at thirteen and pro
at twenty, in local companies, in Argentina.

AP: What inspired you to become an artist? Who or what styles have
influenced your work the most in your career?

SS: Mainly (Carmine) Infantino's Flash 113 (the first one I've got) and Gil Kane-Murphy Anderson's Green Lantern 4 (got it together with Flash 113), both in Mexican editions. Plus James Bond's Dr. No and
Goldfinger. Though I've been trying to do super-characters in Wayne Boring's style way earlier. 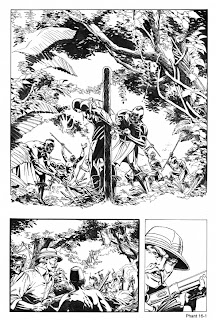 Plus lots of movies (John Ford, William Wyler, Robert Bresson, Sergio Leone, and many more). And novels, and real life stories... And Classic painters Van Gogh, Vermeer, Caravaggio... Some local artists: García Lopez (when he was here), Alberto Breccia, Arturo Del Castillo, Ruben Marchionne... Someone has said that everything you see or hear has an influence on you, and I believe it's true.

SS: I began going to local publishing companies with samples. It took me almost four years to land my first story, done in team with my friend Gaspar Gonzalez.

AP: Is comic art your preferred type of art? If so, why, what appeals to you about the sequential form of comics?

SS: Yes, I like comics over other kinds of storytelling. Maybe because we were poor and you can manage comics with just paper and pencil.

AP: You've worked or are working on several characters for Moonstone. What properties have you drawn? 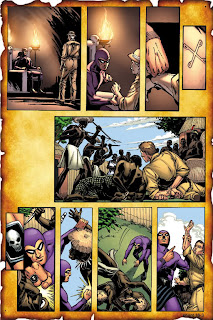 I did lots of work for local and Italian publishing companies, plus
ghosting for fellow artists, even with stories for Marvel, DC and
Eclipse.

AP: The Phantom is a major character, not just because of its long
history, but because it has a dedicated fan base. How much did that
history and those fans influence how you handled your art chores on
the Ghost Who Walks? Did you make any design changes in the Phantom?

SS: I've followed and collected local editions of Phantom as a kid
Wilson Mc Coy and Sy Barry, later, plus Gold Key's Phantom by Bill
Lignante, I loved them all, and when I began drawing Phantom for
Moonstone, I just tried to get as near as I could to those great
artists.

AP: In your opinion, why is The Phantom so popular? What keeps people reading this guy in purple tights who lives in the jungle?

SS: Well, I sure don't know that. Should I know the answer, I'd use the formula to get rich.

AP: You've also done some work on Captain Future? How, if it does at all, does the style and technique you use for Captain Future differ from what you did on The Phantom?

SS: So far I've only been sketching and gathering Captain Future references, but I'll try to get all together and see if Mike, Joe and readers like it. I hope so. I'll enjoy drawing him, for sure. 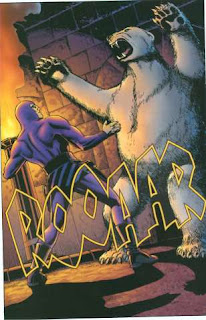 As a reference, I'll say that I did some SF stories for local companies some years ago. As a matter of fact, I did almost all kind of stories: war, western, historical, romance, police action-detective, you name it.

AP: Honey West is another Moonstone property that you've graced with your skills. Do you approach a story differently with a female protagonist artistically than you would any other piece?

SS: At local companies, I've worked on romance stories for almost
three years, some 300 pages. Many of those stories had female
protagonists.

AP: Can you tell us about your general technique? When you sit down to draw, do you have a particular process or regimen you go through in
completing work?

SS: I read the story three or four times to be sure about the whole story, try to get what the writer tried to do and get as near as I
can with the mood. Then, I go sketching in small size, very loose sketches. I get the sizes of the things on the panels and a general view of the action. Then I pencil, working most on whatever I should have some doubt, then comes the inking. I believe it's most regular work, once you get into the right mood.
AP: Do you have any projects coming up in the future that you can share with ALL PULP? 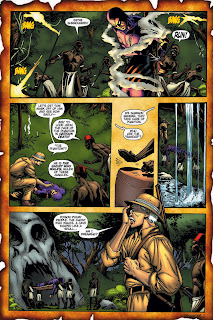 SS: Yes. I work on anything I can as long as editors, writers and readers like it.

AP: Thanks so much, Silvestre, for stopping by at ALL PULP!

SS: Thank YOU, and ask anything more you want. There is some more information in Wikipedia and some other local interviews: they are in internet. But feel free to ask anything you need to know.
Silvestre
Posted by All Pulp at 8:18 AM