THE RETURN OF RAVENWOOD! 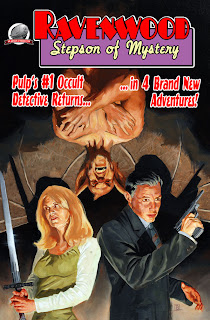 He is an orphan raised by a Tibetan mystic known only as the Nameless One. As an Occult Detective he has no equal and is called upon by the authorities when they are challenged by supernatural mysteries. One of the more obscure pulp characters, Ravenwood – The Stepson of Mystery appeared as a back-up feature in the pages of Secret Agent X magazine. There were only five Ravenwood stories ever written, all by his creator, the prolific pulp veteran, Frederick C. Davis.

Now he returns in this brand new series of weird adventures, beginning with this volume in which he combats Sun Koh, a lost prince of Atlantis, battles with monstrous Yetis in Manhattan and deals with murderous ghosts and zombie assassins. Four of today’s finest pulp storytellers Frank Schildiner, B.C. Bell, Bill Gladman and Bobby Nash offer up a quartet of fast paced, bizarre thrillers that rekindle the excitement and wonder that were the pulps.

With a stunning cover by Bryan Fowler and dramatic interior illustrations by Charles Fetherolf, Ravenwood – Stepson of Mystery was designed by Rob Davis and edited by Ron Fortier. Once again Airship 27 Productions presents pulp fans with another one-of-kind quality pulp reading experience like no other on the market today.

Discounted at our on-line shop. (http://www.gopulp.info/)

OPEN CALL FOR SUBMISSIONS TO
HOW THE WEST WAS WEIRD 2
I am now taking pitches for stories to be published in How the West Was Weird, Vol. 2 in 2011.
What am I looking for?
I’m looking for stories that qualify as “weird westerns” – basically a western mixed with some other genre. This usually means a western with a horror or sci-fi twist, but feel free to play with the concept. I’ll consider anything that’s both a western and weird. The less obvious, the better. If you need some more coaching on what a weird western is, Wikipedia has a pretty good article on it here: http://en.wikipedia.org/wiki/Weird_western.
Stories should be between 1K and 8K words. I’ll consider stories up to 10K, but it really better be something special if you’re going that long. Shoot for 8K.
Your deadline for the completed story is March 31, 2011. However, some time before that I’m going to need a pitch. This is just a couple of sentences or paragraphs that gives me an idea of what your story is going to be about. This is so I don’t get three stories that have essentially the same plot (zombie cowboys vs. vampire indians, for example), and you don’t spend a couple months writing a story that I then have to pass on. There is no deadline to get me your pitch, but the earlier I get it, the more likely someone isn’t already doing that sort of story.
I have no problem with you using series characters that you’ve used in other stories or books, but there are a couple of rules with that. I want a story that hasn’t been published elsewhere yet, with a gentleman’s agreement that it won’t be republished until at least a year after our book’s publication. Also, the story has to be fully understandable outside the context of your character’s other stories. Even if I’ve never read the book you introduced Robo-Sheriff Z9 in, I shouldn’t have any problem following the story you write about him for HOW THE WEST WAS WEIRD.
What’s in it for you?
Unfortunately, I’m not offering any upfront pay. If the book breaks even, any profit it makes will be split evenly between the contributors on a quarterly basis, minus 10% for the publisher, Pulpwork Press. Please keep in mind that the last sentence contains a very big IF. How the West Was Weird, Vol. 1 has been out for 9 months now, and even though it continues to sell steadily every month, it hasn't made its money back yet.
This isn’t to discourage you – I truly believe in the long-term lifespan of these books – but I don’t want anybody planning to go buy a car with the proceeds.
So with that pie in the sky stuff out of the way, what do you realistically get?
A nifty little book with your name on it, mostly. Unlike the last volume, I will also be providing a contributor copy for everybody this time around.
What else?
As with the last volume, Jim Rugg has signed on to create another cover for us. I’m really looking forward to seeing what he comes up with, and I’ll share it with the contributors as soon as I’ve got it.
For those of you who weren’t around for this last time, you can check out the first volume of HOW THE WEST WAS WEIRD at Amazon: http://www.amazon.com/How-West-Was-Weird-Tales/dp/1449580572/ref=sr_1_1?ie=UTF8&s=books&qid=1287249761&sr=8-1. You can also read Josh Reynolds’ contribution, Camazotz, for free at the Pulpwork Press site at http://www.pulpworkpress.com/pulpworkpresspresents.htm.
If you’re interested, or you’ve got questions not covered in this email, drop me a line at RussLee74@gmail.com and I’ll try to answer them.
﻿
Posted by All Pulp at 7:10 PM