Reviews from the 86th Floor by Barry Reese 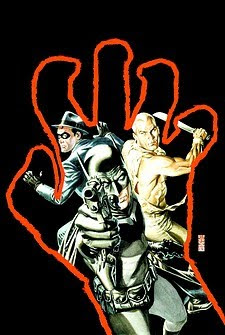 Well, the series finally continues. This six-issue miniseries was supposed to "kick-off" DC's First Wave line of titles but it's still chugging along for some reason, unable to reach the finish line.

Artwise, this continues to be a winner. There are small quibbles here and there but overall Rags Morales is the main attraction to the series (aside from the visceral thrill of seeing The Spirit, Doc Savage and Batman all cavorting about on the same page).

The story, though.... Sigh. The best thing I can say is that, compared to DC's Doc Savage series, this thing reads like Watchmen. But that's only in comparison -- on its own merits, the labyrinthine plot is confusing at best and boring at worst. I do like the twists on Batman's personality and the writer does seem to realize that pulp should be exciting -- meaning there's more derring do than most recent issues of Doc's series -- but it just all feels flat. It's like the creators don't really care, so why should I?

Basically, the Golden Tree organization is trying to do some awful thing and it involves floating cities and robots, along with icky irradiated gold that is injected into people's veins. Sounds exciting, I know, but trust me -- that sentence I just typed is more goosebump-inducing than anything on the printed page. I continue to actively dislike this version of The Blackhawks and think that Rima the Jungle Girl's role feels absolutely unnecessary.

Maybe it will read better in trade -- but somehow I doubt it. DC has fumbled this First Wave stuff from day one. How can you miss with The Spirit... Batman... and Doc Savage??? Three of the greatest characters ever created -- simply tell a story that's worthy of those three and you're guaranteed success. But DC, from the beginning, seemed more interested in changing the characters to fit what they wanted to do, rather than the other way around.
Posted by The Rook at 5:45 AM