And Lastly for ALL PULP's Halloween ReviewAThon-Holmes...as done by Powell!! 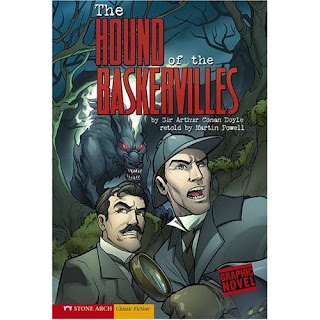 Sherlock Holmes. The name conjures a very specific image. Angular nose, deerstalker cap, pipe, violin. And a stalwart companion named Watson. Now, there have been twists on the original, some fairly decent, some gut wrenchingly bad. I am a firm believer, though, that except in a couple of cases, the best way to retell a Holmes story is to keep all the tropes that Doyle gave us originally. Interpret it your own way, sure, but leave Holmes Holmes.

I, for one, am glad Powell and Perez believed that, too.

“The Hound of Baskervilles” from Stone Arch Books is a graphic novel retelling of one of the best Holmes stories ever. Equal parts mystery and horror story, “Hound” tells of an ancient curse plaguing a family on the English Moors. Watson and Holmes are brought in to hopefully save the Baskerville family line from an alleged hell hound stalking members of said family. That’s the basic concept that almost anyone familiar with when they hear the story’s title. What they get in this version, however, is that and so much more.

Powell faithfully adapts Doyle’s work, keeping the story as we know it intact. What he adds to his interpretation, by the turn of phrase, the sharp, effective dialogue, and the pacing of the tale (The whole novel is condensed into 37 pages) is a tension that keeps the reader turning the pages. We get a Holmes who is self assured, focused, and ready to tackle the issue both intellectually and physically. We also get a Watson worthy to be Holmes’ wing man. Powell sees Watson for what Doyle meant him to be. A complement, not a foil, to Holmes. And that shines through plainly in this volume.

Perez’s take on the story is simply dead on phenomenal. Although a hint of cartoon winks his eye in his work, it’s a welcome shine added to the work. There are excellent moments captured all throughout the book, but my absolute favorite is a scene of Watson firing his gun. That’s a poster moment for me.

“The Hound of Baskervilles: A Sherlock Holmes Mystery” is an excellent graphic novel telling of a classic tale and is accessible by all ages. Kids will thoroughly enjoy the action and the dialogue and adults equally get a true helping of Holmes/Watson goodness.

Five out of Five Tips of Hancock’s Hat (Five tips are reserved only for those who have channeled Dent, Gibson,Doyle,  Page, or one of the long gone, but not forgotten greats.)
Posted by All Pulp at 8:08 PM