"DRACULA LIVES" AS A PART OF THE HALLOWEEN REVIEWATHON!!! 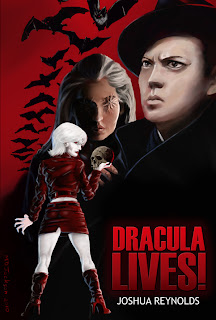 The title of this book itself will make a person pick it up off the shelf. Yes, its one in a long list of cliché sounding references to the ultimate vampire used hither and yon in books, comics, and movies, but it’s catchy. It sings. The difference between this and other tellings of the return of the worlds’ favorite undead aristocrat is a major one.

This book is in no way like anything that has come before it. Trust me. Read the first sentence of this paragraph again. It’s a true statement.

The title tells it all. This is a story of Dracula living again. The way Reynolds brings Vlad back from the grave and squarely plants him firmly in the Twenty First Century, however, is both original and nostalgic. At some points, it reads like a good ol’ fashioned heist and chase movie from the 1970s. Other parts squarely compare to some of the best Ian Fleming pages ever written. Still yet more of it smacks of Le Carre at his best. The originality comes in with the way that Reynolds takes these various types of stories, including a fantastic exploration of what makes his central character tick, and turns them into a high octane, faster than fast and well paced espionage/horror/adventure/noir novel as well as a more than proper return of one of the few villains that truly defines evil in the Pulpiest of ways.

The plot is actually fairly simple. A former government man turned mercenary is hired to procure a rare artifact. Who hires him as well as why he was really hired is a mystery for more than three quarters of the book. Almost immediately after being retained, various other parties show interest in our focal character, Jonas Cream, and the chase is on. I mean it. Chase. Literally around the world. That’s the plot, or at least as much as I’ll reveal. For hints at what remains of the plot, read the title again.

There are a couple of things about “Dracula Lives” that might have been better for me as a reader. One is the number of people pursuing Cream throughout the book just gets plain confusing At times, I thought one person was with one group, but then maybe they were associated with another interested party and…well you get the point. Now, this in part was Reynold’s intent obviously, to keep the mystery interesting and lively. But keeping things straight early on in “Dracula Lives” required a bit of re reading and took away from the experience a bit.

A second issue is a little harder to explain without giving major plot points away. Let’s just say the way a titular character reacted toward the end of the novel to a situation went against everything that had been established about said character thus far. I totally would have had the reaction I took issue with, probably one much worse, but as a reader it was jarring when….well when that happened.

Those two points, however, are minor in comparison to the pulp goodness that Reynolds has wrought with “Dracula Lives.” The action starts in the first two pages and doesn’t even really stop at the last period of the book. The characters are exciting and each one stands on their own, no cookie cutter comparisons here. The political machinations and the resultant spy hijinks are well crafted and expertly delivered. Oh, and then there’s the title character and his various children. Wow. Yeah, that says it…wow.

In a nutshell, Joshua Reynolds leaves no doubt indeed that “Dracula Lives” when you close this book. What is in doubt, though, is just how happy a life it might be for ol’ Fang Face. Obviously much more is to come as various and sundry mortals mobilize against the evil that has returned and I will definitely be on the blood splattered frontlines just to watch.

Four out of Five Tips of Hancock’s Hat (usually reserved for heads of state, arresting officers, and little old ladies, which is pretty darn good.)
Posted by All Pulp at 6:40 PM