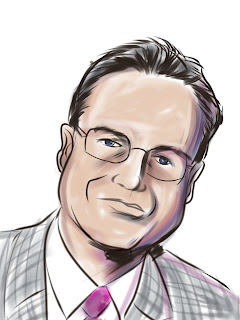 AP: Tell us a little about yourself and your pulp interests.
JB: When I was a kid I owned all 80-some Doc Savage paperbacks. I lived and breathed Kenneth Robeson.
AP: What does pulp mean to you?
JB: Adventure stories, told in a direct, no nonsense fashion, or possibly something having to do with the timber industry…
AP: Your entry into creating comic books is rather unique compared to most. Tell us about the personal story that launched your comic book career.

JB: It's both a scary, as well as a redemptive tale, and one actually told in my first comic Book. I had always loved comics, and had always wanted to create a comic, but I was one of those folks who talked about it a lot, but when I sat down to actually make one, I found I didn't really have a story to tell.Then in 2002 I had a serious problem with my eyes, a detached retina, which necessitated having surgery on both of my eyes, a scary prospect for a visual artist. Needless to say, I recovered, but at last I had a story to tell, and at age 45 I drew my first comic, Detached, about the experience. AP: Let’s talk Grumbles. How did your long running weekly comic strip come about, how long has it been appearing, and where folks can find it.

JB: Grumbles has been running in Atlanta's Sunday Paper for over six years now. I first pitched it when I heard they were starting an alt-newsweekly in town, and they were nice enough to accept it. I had a guaranteed 9 weeks of strips that they'd buy. I'm now working on week 314.I wish I were more of a self-promoter, so I could get it into more publications, but I'm happy that someone pays me to draw on a weekly basis. It also serves as an outlet for my anger at what I consider to be the stupid or cruel or selfish behavior of my fellow man, and expressing that angst on a weekly basis keeps my head from exploding.All of the weekly strips are available in an archive at http://jamesburnsdesign.com/comics/grumbles/, and I also sell physical compilations of each year's strips at comic shows, and on Indyplanet.com. 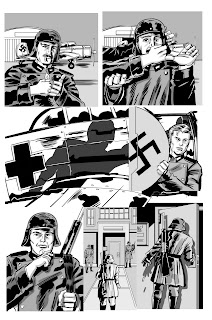 AP: You handled the art on Lance Star: Sky Ranger’s leap from pulp anthology to comic book. How did that come about?


JB: Atlanta has a vital and energetic community of comics creators, and there are frequent chances for them to get together and work on projects together. That's how working on this comic came about, from talking with Lance Star's creator Bobby Nash, and as a result of networking at comic shows.It was a lot of fun to work on, especially as this was the first script I've drawn that I hadn't written myself. What a fun character! Who doesn't like to draw Nazis being punched out, or fantastic air battles?
AP: You were the creator, editor, and publisher of Real Magicalism. Tell us a bit about the book and the title. Are there plans for more Real Magicalism volumes?

JB: Well, the title comes from the literary term for a dreamlike narrative style, called magical realism where you can't really tell what's real and what's part of the dream. I twisted the title around to both pay homage to that genre, as well as to indicate that these stories in the anthology also contained a twist, a slant. I'm very proud of that volume, and learned a lot about pulling an anthology together. It's quality is due to the wonderful work with which I managed to surround my own work with, which in the end made my stuff look that much better. I cannot thank the contributors enough.Yes, I'd like to do another volume when I get enough of my own work collected to start the ball rolling again.

AP: Who are some of your artistic/creative influences?

JB: I love the classic, old-school storytellers; Kirby, Wally Wood, Wil Eisner… They all share 2 characteristics - the ability to tell a story really well, and they're all amazing visual artists.They're something to aspire to.There may be some illustrators out there who have perfect technique, their draftsmanship might be considered superior to these folks, but in terms of pure storytelling, they're unparalleled.

AP: What does James Burns do when he’s not making comic books?

JB: For the last 25 years I've created motion graphics for a living; that means things like title animations for video, cable, television, and the web. For the last year I've also been teaching what I know at the Savannah College of Art and Design (SCAD), here at their Atlanta campus.On the personal side, I've been married to the beautiful and talented Rebecca Burns, author, editor, and writer, for over 21 years.We have a beautiful 18-year-old daughter who's just starting college. I'm a very lucky man. 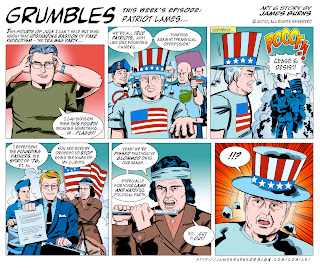 AP: Where can readers find learn more about you and your work?


AP: Any upcoming projects you would like to mention?


JB: Grumble Year 6 should be out before the end of the year, and I'll also have translated versions of a couple of my strips in the Italian magazine Mamma! My plan is to take Europe by storm, and become famous over there like Jerry Lewis is in France.

AP: Are there any upcoming convention appearances or signings coming up where fans can meet you?

JB:  I tend to stick at home and not travel far afield, which means I'll be at any Atlanta area convention that will have me. The end of the year looks busy for me, with a trip to Germany and some much-needed back surgery (perhaps I'll get a new comic out of it… "Slipped!") , I probably won't be at any show until Wes Tilander's next Atlanta Comic Convention, on Superbowl Sunday.
AP: You have served as a writer, artist, colorist, letterer, editor, and publisher. Are there any creative areas you’ve not been worked in that you would like to try your hand at doing?

JB: I think it would be fun to do a children's book, or perhaps a novel. I've always envied writers. Especially comic book writers. They're allowed to write something like "… at that moment every soul on the planet stood up, put on a crushed velvet tuxedo, slicked back their hair, and brandishing an authentic katana sword, joined the battle..." and then some poor comic artist would be expected to draw that. What a scam!

AP: And finally, what advice would you give to anyone wanting to work in comics and/or art?

JB: Talk is cheap. Lot's of people say they want to do comic books, but all they ever produce is fan art or single illustrations.If you really want to create comic books, just sit down and start doing it. Don't wait to get a publisher, don't wait to get a deal, just buckle down and start learning the craft of storytelling by actually putting pen to paper and by doing it.
Posted by All Pulp at 1:24 PM