ANNOUNCING THE FIRST EVER ALL PULP Pulp Artist Weekend!!! Lead off interview-Tamas Jakab!

That's right, Pulpsters!  In a last minute inspired decision ALL PULP is now dedicating weekends (as long as material and artist types last anyway) to that often unsung pulp creator, the ARTIST.  Each weekend, ALL PULP will endeavor to post interviews, columns, news, etc. that focuses on the work of artists of all types in bringing pulp to life!

With the short notice of this (sorry, ALL PULP just works that way sometimes), if you have any art you'd like to share, make sure you have permission of the artist and send it on for the first ever ALL PULP P.A.W. Gallery to debut ON SUNDAY.  This will occur every weekend and will include art submitted for the Gallery each week!

First up for ALL PULP's P.A.W., an interview with Tamas Jakab, artist and co-creator on EL GORGO!!! 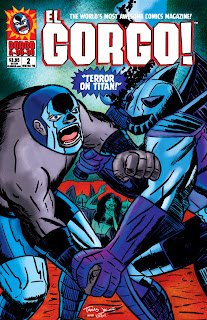 AP: Who is Tamas Jakab?
TJ: Tamas Jakab is a person (presumably, though he may actually be a clone or a robot), who lives in Cleveland, Ohio with 2 cats, a dog and a girl. I had a brief career doing cover and design work for the late, great Frontier Publishing, as well as various freelance gigs. I am the co-creator, artist, letterer and colorist on EL GORGO! On the side I work a day job unrelated to comics.
AP: What are your artistic influences and aspirations?
TJ: From comics, Jack Kirby, because all superhero comics are Jack Kirby, whether they realize it or not. Also Grant Morrison, because he goes for the big, crazy ideas, and superhero comics work best when they're big and crazy. Otherwise, the list could go on and on - Los Bros Hernandez, Darwyn Cooke, Steve Ditko, Mike Allred...
AP: What do your think your strengths as an artist are?
TJ: Certainly not inking. I think I'm barely adequate as an inker, which can be frustrating, because I really love the aesthetics of comic book inking. I do think I have a really good eye for color, design and typography though.
AP: What’s your dream project?
TJ: Currently, EL GORGO! I'm really not the type of person who just wants to draw BATMAN or SPIDER-MAN. I prefer working on original concepts where I've got a lot of creative freedom and can play with different styles and genres.
AP: How did you get involved with Mike McGee and end up co-creating EL GORGO! ?
TJ: I've known Mike since 1987. We first collaborated on an adaptation of one of his short stories for the FRONTIER PUBLISHING PRESENTS comic back in 2005, and we'd been trying to get a new project going for 2 years with little success. EL GORGO! was a happy accident that came from a proposal to do a throwaway story for a comics anthology. We pretty much had the basic character of El Gorgo worked out in about an hour. We quickly realized we had a really fun, high-concept character and kept at it after the anthology didn't work out.
AP: Who is EL GORGO! ?
TJ: EL GORGO! is a super-intelligent luchador gorilla scientist who saves the world on several occasions, plays in the world's greatest surf-rock band, Gorgo-A-Go-Go, and is an historical novelist on the side. He's pretty much Reed Richards, Captain America, Indiana Jones and Doctor Who rolled into one.
AP: Where do you see EL GORGO! as a character and as a comic book going?
TJ: Optimally, EL GORGO! would be in the mind and heart of every living being on Earth. Right now we're just getting issues out as we can, which isn't as frequently as it should be, and I'd like to see us move away from print and entirely into digital publishing.
As a character, we've really just gotten started...
AP: What do you and Mike have planned for EL GORGO! ?
TJ: We have way more things planned out than we will probably ever get to. Currently we have the book plotted out to about issue 13 or so, which would run through the Secret Origin of El Gorgo. In between, there are still some major characters to introduce, but I can't give spoilers. Should we ever get to it, we have a good idea what the last EL GORGO! story would be, and I know exactly what's on the very last page.
In a perfect world, we'd find the time to go at least 40 issues, which seems to be the sweet spot for good comic runs.
AP: You did the cover for DILLON AND THE LEGEND OF THE GOLDEN BELL.  What was the concept for that cover?
It was based on a cover from DOC SAVAGE MAGAZINE in 1933, "The Red Skull" by Walter Baumhofer, which is featured in the great collection PULP ART. Given Dillon's pulp roots, particularly Doc Savage, I figured I'd go right back to the source for inspiration.
TJ: How did you achieve that aged look that makes the cover look like an old paperback?
AP: I use a variation of a technique found here: http://jonnycrossbones.com/tutorials/how-to-make-your-cover-look-old-and-worthless/

Additionally, on the EL GORGO! back covers, I used halftone patterns to simulate old-school color separation by hand. I love the fact that I can use expensive modern technology to simulate cheap printing methods that were replaced by better technology.
AP: What’s your method of working?
TJ: I work 100% digitally these days. I reached a point where it made no difference if I worked on paper or on the computer, except it's easier to fix mistakes on the computer. I work primarily in Adobe Photoshop and Adobe Illustrator, and I now use Manga Studio to draw and ink EL GORGO! The cover for DILLON AND THE LEGEND OF THE GOLDEN BELL was created in Corel Painter and then finished in Photoshop. 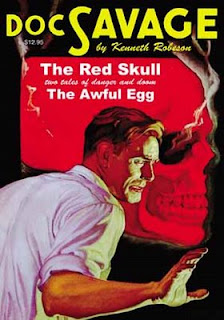 AP:  What’s a typical Day In The Life of Tamas Jakab like?
TJ: Very hectic and yet unspectacular.
AP: Where should we go to see other examples of your work?
TJ: The covers for Frontier and some pre-EL GORGO art projects are still hosted on my old website, http://rednever.com. I'm no longer maintaining the site, and eventually the art projects will find a new home.
AP: Anything else we should know about you?
TJ: I haven't forgotten about EL GORGO! issue #4! I have some other non-art projects I have to work on, but I'll be back on it as soon as I can!
Posted by All Pulp at 8:23 AM