Charlotte, NC - October 24, 2010 – For immediate release:
Sarah L. Covert  has been working in the Horror/Strange Tales/SciFi industry for some time. She started off creating several stories for a children’s Science Fiction board game. She spent several years with Lurker Films and the H.P. Lovecraft Film Festival in Portland, Oregon. Sarah is also the creator and editor of She Never Slept - a science fiction, strange tales, and horror news and reviews website.
The idea for Double Feature Press has been brewing for over a year now. After reviewing a lot of books from indie/small press, Sarah came to a realization. There are a lot of good publishers out there and some really great publishers, but for every one of those there are three or four really bad ones. She heard the same stories from many authors - - the publisher didn't edit their copy, they didn't promote them, they didn't give them copies of their work, and worse than all that - sometimes the publishers wouldn't even pay them. Eventually she grew weary of hearing this kind of thing and decided to become part of part of the solution... she threw her hat in the ring and added one more small press to the ranks of the good guys!
About Double Feature Press:
We are a small press formed by Sarah L. Covert in October of 2010. Sarah grew up on drive-in movies. That is where her love for Science Fiction, Strange Tales, and Horror was born. Double Feature Press has an interesting concept, based around the old double feature drive-in flicks. Each book has two authors. Each author contributes either short stories, poems, or novellas to make up their half of the book. The books will all be in the genres Sarah loved as a child and loves even more now. They will be limited edition runs. Our first book is due out in 2011. 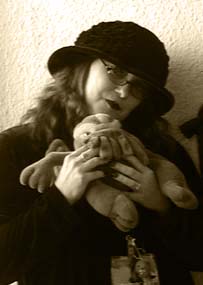 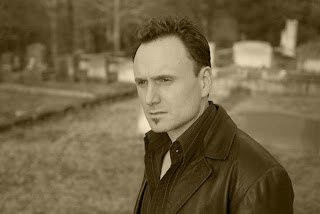 Photo Copyright 2010 Josh Lamkin
Robin Spriggs is the author of Diary of a Gentleman Diabolist, Wondrous Strange: Tales of the Uncanny, Capes & Cowls: Adventures in Wyrd City, The Dracula Poems: A Poetic Encounter with the Lord of Vampires, and nearly 200 short stories and poems that have appeared in a wide variety of publications. In addition to writing, he performs on both stage and screen and serves as a mentor and life coach to a diverse circle of poets, artists, madmen, etc. He is currently at work on no fewer than nine projects, his next book among them.
"...an author who is serious about stretching the creative boundries of fantastic literature." -Cemetery Dance
"Spriggs's style is filled with elegance, literary wit, and uncanny dread. His work builds to an inescapable climax that eschews the happy endings in the work of lesser fantasists. I enjoy the frisson of his endings immensely." -Michael A. Arnzen
"...a master of the short form... a linguistic acrobat who works without a net." -Harry Shannon
Diary of a Gentleman Diabolist - Anomalous Books
Diary of a Gentleman Diabolist Fan Page on Facebook
Robin Spriggs Fan Page on Facebook
House of Nine - Unofficial Fansite for Robin Spriggs 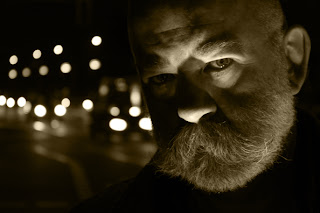 Joseph S. Pulver, Sr., a life-long fan of pulp horror, fantasy, and science fiction, found himself exiled from a happy anonymity as of 1999 when Chaosium, Inc. published his highly acclaimed Cthulhu Mythos novel Nightmare's Disciple. His effectively chilling fiction and verse has appeared in collections including The Book of Eibon, Black Wings, Nameless Cults, The Tindalos Cycle, Lin Carter's Anton Zarnak Supernatural Sleuth, Rehearsals for Oblivion - Act 1, and many others. He has had nearly one hundred stories and poems appear in venues like “Strange Aeons Magazine” and “Crypt of Cthulhu”. He has received many “Honorable Mentions” in Ellen Datlow’s Year’s Best Fantasy & Horror and Best Horror of the Year. Joe also edited Ann K. Schwader’s verse collection The Worms Remember (2001).
Hippocampus Press released Blood Will Have Its Season, Joe’s first collection of short work, to much acclaim in 2009. It was edited by S.T. Joshi. Joe has new tales upcoming in S.T. Joshi’s Spawn of the Green Abyss (Mythos Books), and several other anthologies. His second collection of short work, SIN & ashes, will be published by Hippocampus Press [Winter 2010].
He is currently working on several new tales and his next novel, and has many new tales coming in anthologies, journals, and magazines in 2011.
"Some writers one admirers and others make one want to do as they do, or try. For me, Joe Pulver is of the latter type. His imagination is so vile so much of the time that it makes me giggle with amazement. And the prose so deadly visionary. I'm grateful that the pieces in this collection are those of a fellow horror writer who has raised the ante on what it means to be such a creature." – Thomas Ligotti
“. . . I’m gawping in amazement, shaken by Pulver’s eviscerating vision. He wields language as a scalpel, a Thompson submachine gun, an axe . . . Joe Pulver calls down the fire. Joe Pulver’s the Man. He’s got the Power.” –Laird Barron
"The prose of Joe Pulver can take its place with that of the masters of our genre-Poe, Lovecraft, Campbell, Ligotti-while his imaginative reach is something uniquely his own." –S.T. Joshi
Blood Will Have Its Season - Hippocampus
Blood Will Have Its Season Group on MySpace
Blood Will Have Its Season Group on Facebook
Blood Will Have Its Season Fan Page on Facebook
Joseph S. Pulver, Sr.'s Fan Page on Facebook
Now Playing [About our first book]: 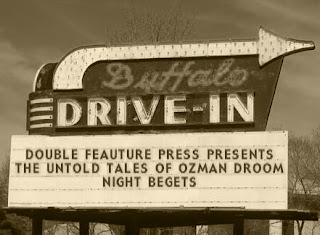 Robin Spriggs - The Untold Tales of Ozman Droom
The Untold Tales of Ozman Droom, according to arcane legend, is a collection of stories and poems about a collection of stories and poems by (if titles can be trusted) a certain Ozman Droom. But who is Ozman Droom? Or what is Ozman Droom? And when, where, why, and how is Ozman Droom? The answers to these and countless other questions of equally perilous rank await the curious seeker within the collection itself . . . provided such a book does indeed exist. And perhaps even if not. Caveat lector.
Joseph S. Pulver, Sr. - Night Begets
Night burns and burrows, vast as any idea it declares its bottomless truth -- Terminus. The players and observers come, absorb and discard atoms, fill moments with ripples they call magic, or love, or chance, heartache, and fate. For knowledge and pleasure they steal editions, wait for, or take, more. Night loves nothing . . . and, finally, it takes all.
Joe Pulver’s, Night Begets, is a collection of tales and poetic texts about lovelorn ghouls and other night-bound creatures as they discover sin and ashes bloom and echo in the noir labyrinths and pitch black, dungeon skirts of Night. It is a work that provokes and will leave an indelible mark on anyone who picks it up and comes through on the other side, painting a world that is as much brutal as it is beautiful and imploring readers to reconcile these seemingly antagonistic aspects of existence.
Posted by All Pulp at 7:51 PM