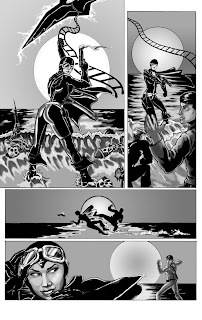 TIPPIN' HANCOCK'S HAT-Reviews by Tommy Hancock
Black Angel -Secret in the Sky" appearing in AIR FIGHTERS #2, Moonstone Books
Written by Martin Powell
Illustrated by Ver Curtiss
First, let me preface this with...I'm just not a big fan of aviator pulp/comics/radio shows/etc.  I mean, I read/listen/look at them because I'm an all purpose kind of guy when it comes to Pulp stuff...but it's not on my favorite list.  Having said that, I know a good story when I see it.  And man, did I see it in this Black Angel tale.
Eight pages is not a lot of room to tell a tale.  What Powell and Curtiss did in these eight pages, however, blew me away, yet it also felt like enough.  the story centers around a report being made to a character referred to as Baronness Blood by a Nazi underling.  As the report is made, the reader sees the action unfold contained within said dialogue.  Black Angel and her awesome aircraft figure into the story, swooping in to save a priest from death at the hands of Japanese soldiers.  Curtiss' images of the aircraft, the Angel herself, and even Baronness Blood are jaw dropping and eye popping.  The detail given to the art accentuates Powell's tight storytelling, giving us a rip roarin' air battle, but also showing the effect of war, even on heroes. 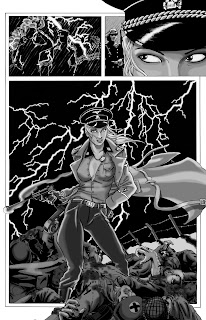 Overall, this story is fantastic in both word and image.  I would have preferred to see a little more intensity in the facial expressions of the priest, as he was a major character in this and went through a horrendous range of emotions.  Other than that, however, 'Secret in the Sky' flies higher than any air pulp/comic stuff I've read in a long time.
Four out of Five Tips of Hancock’s Hat (usually reserved for heads of state, arresting officers, and little old ladies, which is pretty darn good.)
Posted by All Pulp at 10:13 AM