Hi, Bill. First of all, thanks for dropping by ALL PULP HQ and agreeing to sit in the hot seat. You’ve had a really great career in so many different writing fields. Let’s see how much we can cover in the next few minutes. Ready to go? Excellent.

AP –Let’s start with a little background data. Who is Bill Spangler, where do you reside? What is your education background and when did you first start writing professionally? 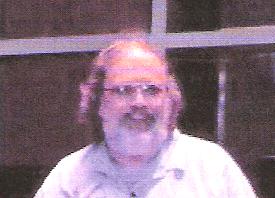 BS –Joyce and I live in Quakertown, which is southeastern Pennsylvania, about a half-hour south of Allentown. I’ve got a bachelor’s degree in journalism from Penn State. My first professional writing job was for the newspaper in my home town. I was a sportswriter, believe it or not. I was 16. I wasn’t a sports fan then, and I’m not now, but that was the job that was available. I grew up in a town in Western Pennsylvania called DuBois. A lot of people want to give that name the French pronunciation, but it’s actually pronounced due-boyce. DuBois’ only claim to fame was that Tom Mix grew up there. No wait, that’s not exactly true. The movie Groundhog Day held its world premiere in DuBois because it was the closest town to Punxsutawney that had a theater.

AP – Was journalism the first career that involved writing for you? What papers did you work for and what was it like seeing your first ever by-line?

BS – The sportswriting job was the first paying writing job I had, but I was writing well before that. I remember writing a story about a time machine in the second grade, and I’m told that I was hand-printing neighborhood newspapers even before that. I worked primarily on small daily and weekly newspapers in Pennsylvania. One daily I worked for lasted only seven issues. Let’s say their business plan was less than complete….

As for seeing my by-line for the first time, I think I still have a clipping of that article somewhere in my files, so, yeah, it meant a lot to me. 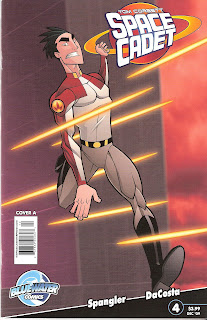 AP –What are the major differences between reporting and fiction writing, aside from the obvious? Do you prefer one over the other?

BS – For me, the major differences were in the things reporting calls for in addition to the writing. Reporting demands a lot of time; you’re going to spend a lot of nights and weekends covering meetings and other events. That’s fine if you’re 23 and single, but it can be problematic if you want to have a life. Sometimes, reporters have to be able to ignore other people’s feelings and generally be obnoxious in order to get to the facts. That can have all sorts of repercussions, both to the reporter and to the people he’s talking to. Also, reporting involves writing and researching at a speed that I found difficult to maintain sometimes. I’m hesitant to make a generalization, but…the newspaper editors I worked with liked good writing. But when they had to choose between good writing and fast writing , they’d go with fast writing every time.

I think I prefer writing fiction over newspaper work, but I still do non-fiction when a good opportunity presents itself.

AP –Tell us about your comic writing career. How did that get started and what were some of your early published comics?

BS – I had written for some fanzines while in high school, but I really wasn’t giving much thought to getting paid for writing comics until the direct market boom of the 1980s. A lot of companies were advertising for new talent, and one of them was Malibu Comics. I sent a proposal for a character I called Bloodwing to Malibu. I assumed that it would be rejected, but I was hoping to get some personalized feedback. To my amazement, Malibu bought it. I’ve worked with a lot of licensed characters; Robotech; Alien Nation; Tom Corbett, Space Cadet, but I’ve sold some original characters too. In addition to Bloodwing—which I used to describe as The Shadow meets Blade Runner—there was the Argonauts, which is very pulp-influenced. I was also one of the writers involved with a character called Jordan Risk. I like to think of him as a gentleman adventurer, in the tradition of the Saint. He appeared in a limited series in the late 1990s called The Deception. 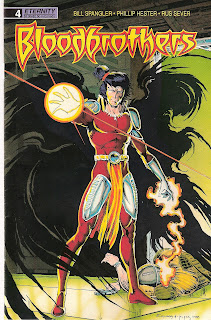 AP –Who was the one artist you most enjoyed working with in that period?

BS – Good grief, I can’t limit myself to just one; how about three? Tim Eldred and I worked on a lot of Robotech stories together and I think we made a good team. We did 18 issues of Invid Wars and a one-shot called Firewalkers. I also enjoyed working with John Ross and Fred Perry. John and I did Argonauts: System Crash for Alpha Productions and an adaptation of H.G. Wells’ Time Machine. Fred and I did eight issues of Tom Corbett, Space Cadet for Eternity.

AP –How did you first get involved with pulp writing?

BS –As I mentioned, I wrote for some fanzines while in high school. One thing I remember doing is a series of sword-and-planet stories about a character I called Jon North. I probably didn’t know the term sword-and-planet just then, but that’s what they were. I think those were probably my first pulp stories. And my comic work was pulp-influenced from the beginning. Now that I think about it, I wrote some fanfiction in high school that might qualify as pulp to (although the term fanfiction probably didn’t exist back then). There was a Man from UNCLE story and one based on The Prisoner, believe it or not.

AP –Were you always a pulp fan or was it something you recently discovered? And how did that come about?

BS – I don’t think I encountered the classic pulp characters like Doc Savage or the Shadow until high school. But I was a big fan of series characters like Tom Corbett and Tom Swift Jr. before that, and I like to think that’s a type of pulp. Also, my favorite comic book characters as a kid were more pulp-oriented than super hero oriented—people like Adam Strange and Magnus, Robot Fighter.

AP –Tell us some of the pulp stories you’ve had published and for what outfits? 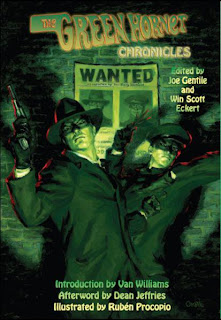 BS –Well, my first project was when the esteemed Ron Fortier asked me to contribute to Airship 27’s first production, Lance Star, Sky Ranger. I wrote “Talons of the Red Condors” for that. I did a Commando Cody story called “The Secret Citadel,” for the first issue of a magazine called Thrilling Tales. And I’ve got a story in The Green Hornet Chronicles Vol. 1, an anthology just published by Moonstone Books. The story’s called “Mutual Assured Destruction.”

AP -What is it about writing pulps that is different from other genres? Why do you enjoy working in it?

BS –With pulp-style writing, you’ve got larger-than-life characters with clearly-defined goal. And, in general, they achieve these goals. They make a real difference in the world around them. It’s hard to do that in the real world, and I think people like experiencing that vicariously. At least I do. lso, I have a weakness for stories that show some type of hidden world or culture set against the mundane world, whether it’s dueling spies, dueling aliens, dueling time travelers or whatever. If you know where to look, or how to look, the world can be a very strange place indeed.

AP –With so many publishers, prose and comics, and now movies, focusing on pulps, there seems to be a real renaissance of the field. Why do you think this is so? And do you think it will last?

BS – I think one reason why we’re seeing this resurgence is that the classic pulp characters were created at a time when there was a lot of economic and social instability, and we’re seeing the same sort of instability now. But I think the pulp tradition never really went away. Even before this recent renaissance, we had characters like James Bond and Dirk Pitt and Indiana Jones. I don’t know if the current interest in pulps has peaked yet or not. It’s bound to start fading eventually, but, with companies like Moonstone and Airship 27 out there keeping the faith, I think the interest will remain pretty strong. 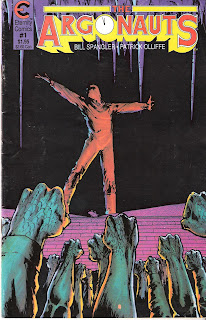 AP –Having done comics, pulps and sci-fi, which is your favorite? Is there a genre you would not feel comfortable writing?

BS – My favorite genre is science fiction, whether it’s in prose or comic form. I’m not a big fan of westerns, but that’s just a matter of personal taste. I can’t say that I’ll never write one. Pulp writers are supposed to be versatile, after all…


AP –What’s on the horizon for Bill Spangler? What new projects do you have coming out in the near future and the long run? Go ahead and plug away.

BS – I’ve been spending most of my time recently working on young adult science fiction, and what I guess is called a historical thriller—something in the style of William Dietrich’s Ethan Gage books. While this isn’t in the future, I think I am going to plug the Green Hornet anthology again. There are a lot of names familiar to All-Pulp writers in that. And fans of old-school space opera might want to check out the recent Tom Corbett, Space Cadet comic I scripted. It was a four-issue limited series, and there was a paperback collection that you should be able to order at your local comics shop.

AP – Bill, this have been terrific. Thanks ever from the entire gang at All Pulp.