HANCOCK TIPS HIS HAT TO THE GREEN LAMA-UNBOUND!! 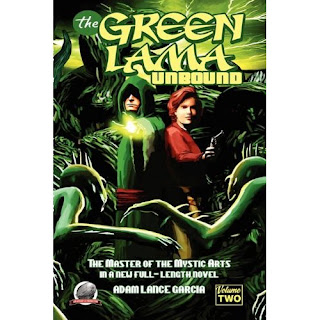 There’s a lot of discussion in the Pulp field, on this site and elsewhere, about what makes a novel or story pulp.  Let’s dispense with that right off the bat.  GREEN LAMA- UNBOUND undoubtedly meets the requirement to be considered pulp, meets it, exceeds it, runs all over it, and jumps on it again.  And that’s not just because the novel, the second volume of Green Lama from Cornerstone/Airship 27, stars a known pulp character.  No, Adam Garcia weaves in all the right elements to make this book pulp.  Heroes we could only wish really existed, over the top villains, a thrill or revelation on almost every page, and enough mysticism, fist throwin’, and other sorts of hoodoo to fill another couple of books.   This is undoubtedly a pulp book.
It is also, refreshingly so, a well put together novel.  Even though this is his first novel, Garcia has mixed all the right ingredients together to make for an interesting, engaging read and an awesome foundation for future stories.  First, the plot is a strong one.  Essentially, The Green Lama and his cohorts are pulled into a battle trying to stave off not only the possible end of the world, but the return of the most evil presence imaginable.  Yes, we are in Lovecraft territory once again, but Garcia doesn’t overplay the Elder Ones card.  He uses the obvious intense evil that these characters represent as a way to bring more out of and the cast, both good and bad guys.  The plot starts and never stops, the hook is set from word one.

Secondly, Garcia has captured the pacing necessary for a good novel.   This novel can probably be described as going at a beyond breakneck speed and it certainly does that.  Garcia, however, deftly works in slower moments, times for the cast and the reader to breathe without ever really stopping the action.  Someone is always learning something new, a new trap is being laid, or someone is plotting against someone else.   The action, both true pulp action and just general movement of the story and characters is handled extremely well throughout the book.
Lastly, Garcia presents a cast of characters that offer any reader everything they could want.  Although The Green Lama is the title character and the story revolves completely around him and his destiny, the supporting cast from Tsarong to Caraway and Jean and even to the villains are rich, full of life and expression, and in no way cardboard cutouts, as so many people seem to believe pulp supporting characters were and should be.

Having said that, if this book has any weakness, it is in some of the characterizations.  Garcia makes an obvious effort to give each and every character down to the smallest one personality and to make them more human.  Although that works for the most part, there are some instances where it seems he tries too hard to make the point that these people are human.  This is most glaring at times in the portrayal of the Lama himself, but also in a couple of other spots.  In trying to bring out the more realistic qualities, Garcia sometimes makes the mistake of making caricatures of his cast, not characters of them.  But again, this is not the rule in this novel, but the exception. 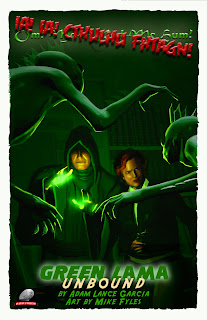 The art of Mike Fyles deserves review as well.  It deserves review because it is simply stunning.  The images Fyles casts of the Lama and others is almost photorealistic in one way, but more than that, it evokes every emotion within the novel.  Fear is present in every line, regret and destiny fill each shadow, and passion and determination etch each face.  Fyles indeed captures in image what Garcia expresses in words.
GREEN LAMA-UNBOUND is a fantastic read and the right way to make sure people buy the next two books that Garcia has already announced are in the future.
Four out of Five Tips of Hancock’s Hat (usually reserved for heads of state, arresting officers, and little old ladies, which is pretty darn good.)
Posted by All Pulp at 2:10 PM