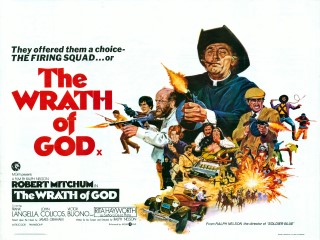 THE WRATH OF GOD

Back in the 60’s and 70’s there was a sub-genre of the western that had these elements: a group of American outlaws/mercenaries/rogues would find themselves in Mexico or South America at the turn of the century and get involved in what amounted to a suicide mission that circumstances forced them to accept. There’s usually a huge amount of money waiting for them at the end of the mission but during the course of the adventure the outlaws would find their long buried sense of justice and honor awakened and they would abandon the money to take up the cause of the downtrodden and oppressed peasantry. This is pretty much the plot of movies such as “The Wild Bunch” “The Professionals” “Duck, You Sucker” and “Vera Cruz” but I’ve never seen this plot worked in such a goofy and flat out off the wall manner as we see in THE WRATH OF GOD.

Emmett Keogh (Ken Hutchinson) is a wildass Irishman stuck in during the 1920’s. He’s blackmailed into driving a truck north by Jennings (Victor Buono) who tells him it’s a load of whiskey that will fetch a helluva price in the United States that is suffering under Prohibition. Since was the guy who arraigned for his passport to be stolen, Emmett has no choice to agree. Along the way he meets Father Oliver Van Horn (Robert Mitchum) who is one of the strangest priests that Emmett has ever met since Father Van Horn drinks liquor like it’s lemonade, swears like a pimp and totes a huge black valise carrying a Thompson sub-machine gun. It’s a weapon that Father Van Horn knows as well as a monkey knows his coconuts which he demonstrates when Emmett and Father Van Horn have to rescue an Indian girl named Chela (Paula Pritchett) from being gang raped by the soldiers of Colonel Santilla (John Colicos) The two men are forced to go on the run with the girl in tow but they’re caught by Colonel Santilla’s troops and Emmett discovers that the truck actually carries guns meant for the rebels. Jennings has also been captured by Santilla and the three men are made an offer they can’t refuse: in return for their lives they have to agree to kill De La Plata (Frank Langella) a local rebel warlord who is causing Santilla a great deal of trouble.

Posing as mining engineers, and Emmett infiltrate De La Plata’s fortress-like hacienda while Van Horn takes up residence in the village church, which has been desecrated. It turns out that De Le Plata hates priests and personally killed the last one himself. Del La Plata’s mother (Rita Hayworth) begs her son not to kill this priest and De La Plata agrees not to since Van Horn saves his mother’s life when the local mine caves in. You see, the mine is filled with gold and De La Plata has terrorized the villagers into digging it out for him. But the mine is horribly unsafe and he needs the expertise of mining engineers to get it out. Of course, the three outlaws have to kill De La Plata before he figures out that and Emmett know as much about mining as I do about Chinese arithmetic. The situation is complicated by Emmett’s relationship with Chela who has fallen in love with him and Van Horn’s increasing desire to live up to the trust the villagers have in him as a priest. And while the outlaws have no loyalty to Santilla, they also see that living under De La Plata’s rule isn’t any day at the beach either. So they make a decision. And that’s when the story really takes off as Father Van Horn begins to conscript the villagers to stand up for themselves against De La Plata, Chela marries Emmett and Jennings makes plans to break outta Dodge and save his own ass.

You see? I told you it was goofy. What makes THE WRATH OF GOD so much fun to watch is that you never know where this damn movie is going to take you or what’s going to happen next. There’s a plot twist every five minutes and just when you think you know what’s going to happen, it doesn’t. There are a lot of really funny one-liners thrown back and forth between the three leading men and from the amount of humor in the story you might think halfway through it that it’s a spoof of the genre. I mean, this is a movie that has Victor Buono as an action hero, for cryin’ out loud. We’re talking about a guy who’s best known role was probably as the King Tut villain on the “Batman” TV show. In this movie he has a great scene where he drives a car like a battering ram into the barricaded gates of De La Plata’s fortress while firing a Thompson sub-machine and then he jumps out to take on the chief henchman with his sword cane. And he’s totally convincing during his fight scenes of which he has several. And he has a bunch of great one liners, such as “We’re going to get along famously” which is used in this movie the same way “I have a bad feeling about this” was used in “Star Wars”

I’ve never seen Ken Hutchinson in a movie before and have no idea who he is but he’s immensely likeable as the wily Emmett who seems to tumble in and out of adventures as easily as you or I eat fried chicken. A lot of the humor in the movie comes from him as he’s constantly thrown into situations where he’s clearly way in over his head but he manages to come through with luck and sheer dogged determination that even Dirk Pitt might admire. And as for Robert Mitchum…well, he’s flat out terrific in this. For much of the movie we’re never sure what the deal with Father Van Horn is.  Not only does he carry an arsenal of machine guns and grenades in that big black valise of his but he also has $50,000 dollars that he hints he got by robbing banks. He has a great scene where he tells the villagers that he’s going to hold an all night service in the church where he performs weddings, baptizes babies and hears confessions where it made clear that he knows the rituals of The Catholic Church inside and out but he also indulges in decidedly un-priestly activities like sleeping with whores, drinking whiskey like water and cussing like crazy. He also carries a Bible that has a concealed gun inside and his cross hides a six-inch blade. Nobody in the movie really knows if this guy is actually one really badass priest or a really eccentric badass who likes to pretend he’s a priest until he spills the beans near the end of the movie.

Robert Mitchum is one of those old type movie stars I love because he looks like a man who actually looks like he’s tough enough to kick your ass with just a look, unlike a lot of the current crop of movie stars who are just too damn pretty to look like they’re as tough as the characters they’re portraying on screen. Robert Mitchum comes from the crop of actors I like to call ‘Old School Tough’. I’m talking about guys like Lee Marvin, Robert Ryan, William Holden, Ernest Borgnine and Steve McQueen. You know what I’m talking about. Whenever he’s on screen in this movie you just can’t take your eyes off him, as you want to know just like the other characters what the real deal with him is.

There are a lot of great action sequences in this movie, especially when the three outlaws finally take on De La Plata’s army in a ferocious shootout in front of the church and the final showdown at the fortress. In between we’ve got a whole series of double-crosses, fistfights, staredowns and showdowns that will make your head giddy. Trust me, this isn’t a boring movie. In fact, despite having been made back in 1972, THE WRATH OF GOD seemed to me a lot more of how current action/adventure are made with it’s healthy mix of violent action, comedy and eccentric characters which is why I think it makes enjoyable watching today. 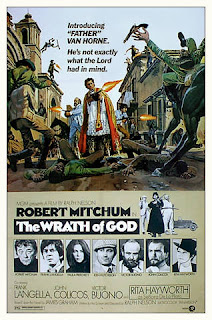 So should you see THE WRATH OF GOD? Hell yes. If you’re a big Robert Mitchum fan it’s worth seeing just for him alone as obviously he’s having a great time with his role and the material. Victor Buono and Ken Hutchinson also turn in great performances as well. Frank Langella has a wonderful time with his role as a bad guy and his scene in the church where he confronts Robert Mitchum and tells him why he hates priests and God is an example of just plain good solid acting from both of them that goes a long way to establishing both of their characters and sets up the conflict between them nicely. THE WRATH OF GOD works as a really good cinematic pulp adventure that should be enjoyed for what it is: a great way to spend a Saturday afternoon with the snacks and beverages of your choice. If you get Turner Classic Movies on your satellite/cable provider you can wait for it to show up there but if you’re a dedicated pulp or Robert Mitchum fan, spring for the rental fee and give it a try. I don’t think you’ll be disappointed. I know I wasn’t.