Reviews from the 86th Floor by Barry Reese: Doc Savage # 7 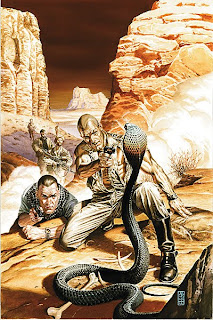 Another month, another issue of DC's Doc Savage series. At some point, you'd suspect that DC might accidentally stumble onto a formula that works -- but there's no sign of it yet. This one continues the "Belly of the Beast" storyline and has Doc and his aides knee deep in the Middle East, still in pursuit of a friend of theirs that they all believed was dead. There's a bunch of pointless fighting in this and several pages of decompressed storytelling where Doc and the gang talk about how amazing their friend was. It was during those pages where I hit upon a key problem that I have with Brian Azzarello's take on the pulp characters in this First Wave universe: pacing. Azzarello is quite obviously "writing for the trade," which in comic book terms means that he stretches everything out so that it fills 6 to 7 issues, which just so happens to be the standard size of a comic book trade paperback. The problem comes from the fact that this sort of storytelling (typified by pages of talking heads, where the characters speak "naturally" in small bursts of words, as occurs multiple times in this issue) does not fit with the pulp paradigm. Doc Savage was many things but it was never slow, boring or ponderous. It was quick, exciting reading and that's where all of Azzarello's First Wave work is falling extremely short.

That and the fact that the plots don't make sense. That's a pretty big one, too. After all the issues of First Wave and seven of Doc Savage, I find "The War" to be a muddled mess that should either be better defined or ignored and the characters seem like pale reflections of their actual selves. Really -- is anybody reading this Doc Savage series and coming away with a clear view of who Doc or his aides are? I can't imagine how, since the storytelling leaves no room for characterization. I know -- how can there be pages of talking heads but no characterization? Pretty easy. People talk and talk but they don't say anything that illuminates them as people. And aside from Monk and Ham's snarky comments towards each other, most of the dialogue could be cut and pasted between characters and nobody would notice. The end of the main story sees the arrival of the Siamese twins we were teased with earlier in the arc and I assume we're supposed to be excited by their arrival but given the fact that they, like everyone else in the book, has been given no personality, I was like "Oh, they're finally doing something with them" as opposed to "Wow! Can't wait to see what happens when Doc fights a pair of Siamese twin children."

In the back-up, Smitty continues to track down a murderer and rapist, intending to kill him at some point. Now, Smitty is still never identified by name which continues to be an awesomely stupid writing mistake. If this was your first issue, you would not know who this character was. Hell, I've been reading for seven issues and I don't know who this character is -- because it sure isn't Smitty.

Anyway, Smitty tracks the bad guy for days and -- get this -- never once disguises himself. Oh, he says he's trying to be cool about it, but he's following the man for days. Without disguising himself. So is it a shock when the bad guy says "Hey, that fella over there -- I think he was at the Track. And the so-and-so. And the so-and-so. Isn't that weird?"

A member of Justice Inc. just follows a guy for days without disguising himself. He follows him to clubs, to a racetrack, even to the freakin' bathroom... Without. Disguising. Himself.

Needless to say, he gets ambushed and arrested by some cops on the take. Benson (you remember him? The star of Justice Inc.? He's here for one page) finally arrives but doesn't bail Smitty out of jail because he's so angry that one of his gang would plan a murder.

Sigh. I can't express to you how much this sucks. On the plus side, the art is real pretty.